Making-Over and Reinforcing a Beloved Bag

I've had this wool shoulder bag since about 6th grade, and used it so much throughout junior high and high school that the bag became riddled with several fist-sized and almond-sized holes and tears. I wasn't ready to part with it, and I've been dying to use it without provoking more damage. 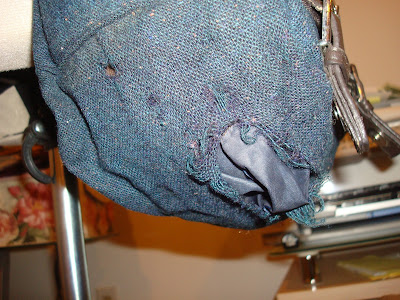 I decided that I could both reinforce the bag and update it to fit my tastes now (as it was embellished by a preteen me). I followed the seamlines of the bottom of the bag, measured out a rectangle tapered at the ends to fit the space, added seam allowances, and cut out the shape from a scrap of black poly cotton.  Thinking back, I should've also added some interfacing, but this was such a quick project (completed in 15 minutes) that I could easily re-do it.

Now this refreshed bag can be re-incorporated into my wardrobe, and the gaping tears have been subdued (for now). The black fabric looks original to the bag, and the more mature styling updates it. Yay for quick projects! 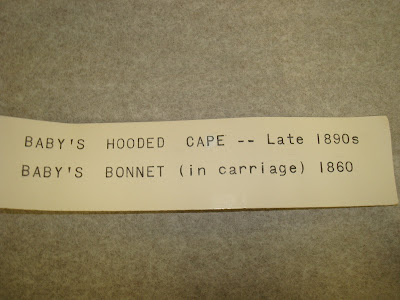 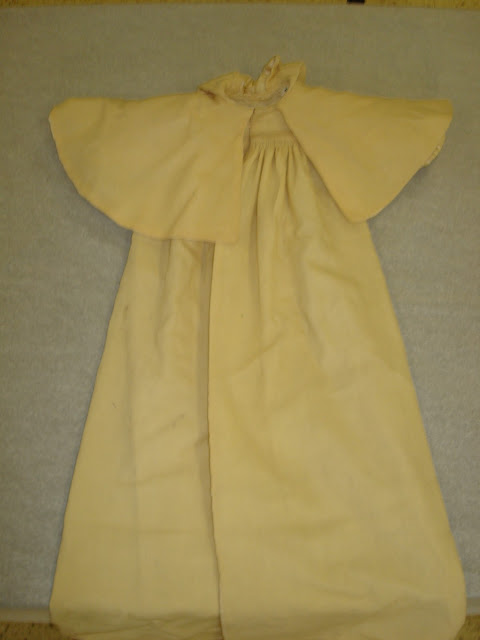 This adorable wool caped coat was displayed on a hanger dangling precariously from the 1850's Wicker Baby Carriage. It was one of several baby garments hanging off of the carriage, and sadly, this hid the beautiful wicker curlicues from view. By removing that ugly baby "doll" from the carriage, I was able to display the various infant garments inside the carriage.

This A-line coat fastens with just a large hook and eye at the neck. The body of the coat is lined in ivory linen, while the cape is lined in ivory satin. The waist and sleeves are decorated with little cartridge pleats. The fullness at the back of the coat is controlled with two knife pleats. The coat has a weird, small, gathered attached cap-like piece, however, whose function I'm unsure of. Was this to protect the back of baby's head when baby was lying in the crook of an arm? Or was this meant to flap back onto the cape? It really is so small, and placed weirdly, so that it would be almost impossible to squeeze an infant's head in there. 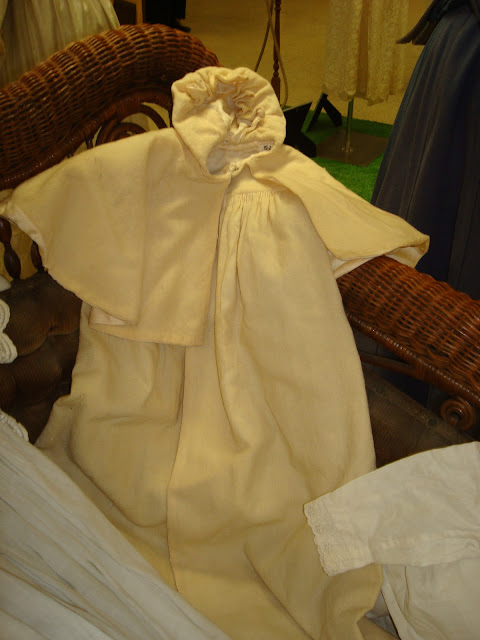 This blue floral lace baby bonnet was a gift of Mrs. Magenheimer, who has donated several objects to the museum. This bonnet was displayed on a yellow Styrofoam head with a yellow giftwrap ribbon bow around the neck, a distracting and rather "cheesy" setup. It is now displayed inside the1850's Wicker Baby Carriage, along with the coat.

The pleats, held with starch, were made with a double layer of the lace. Frankly, the whole bonnet seems rather large for a baby's head, as it was just a bit too small for the Styrofoam head mount. The crown of the bonnet had some dirt and grit on the surface. The whole bonnet was sprinkled with teeny yellow spheres that I originally thought were sacs of insect eggs, but that I later realized (with some help from the circulation desk) were actually paint splatters!!! The yellow paint must've been from those yellow wooden dividers around the room...how could the person painting them have been as careless as to splatter paint onto the museum's precious objects?! I did my best to wash the bonnet, soaking it several times in cold water (and I found an insect that had been eating the starch!!) but the paint splatters still remain...

Part of me has a really hard time believing that this blue lace bonnet is from the 1860's. The fabric just seems so stiff and synthetic to me, and the pattern of the lace itself is large and clumsy, lacking the gracefully intricate designs of even machine-made laces of the era. The lace is obviously machine made, but the fiber content is difficult to determine. The lace is neither silk, linen, nor wool; all plausible options for the mid 19th century. The bonnet, although starched, has a distinctly scratchy feel. The background net is a hexagonal shape. 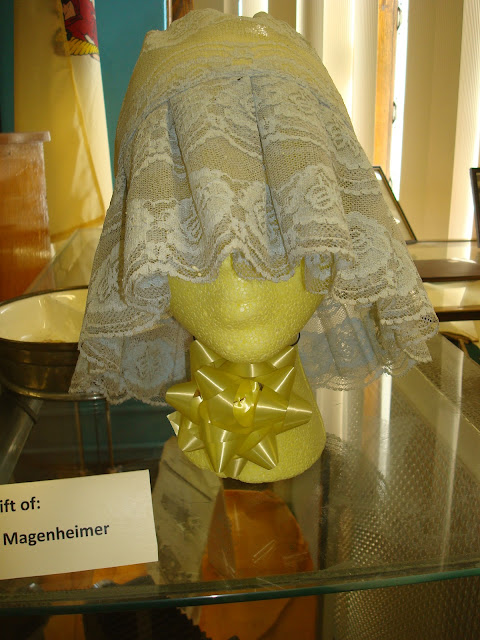 The coat and the bonnet are now displayed inside the carriage, along with a pintucked Christening gown and a lace Christening gown. This really allows the woodwork of the carriage to "pop" against the soft shades of white and ivory. The carriage was originally placed in the far corner of the dias, but now it is more incorporated into the display by being alongside the matronly 1907-09 Blue Wool Visiting Dress, adding to the vignette-like quality the museum committee wanted me to achieve.

The Kearny History Museum has on display a plethora of antique accessories, which I would like to share with you in detail. The following parasol, muff, and hat are displayed with the 1907-096 Blue Wool Visiting Dress.

This silk and tulle parasol has a curved bamboo handle dates the parasol to around 1895. The silk cover of the parasol, a silk and cappuccino stripe, has become rusted in many places from the frame. The entirety of the silk cover is shattered; if I were to open this umbrella, the whole cover would disintegrate in a poof of dust. The tulle ruffles isn't in the best shape either; it's dirty and pretty torn up in some places. The tulle ruffles are edged with ivory silk ribbon. The parasol is tipped with plain ivory. It is decorated with a silk tassel. 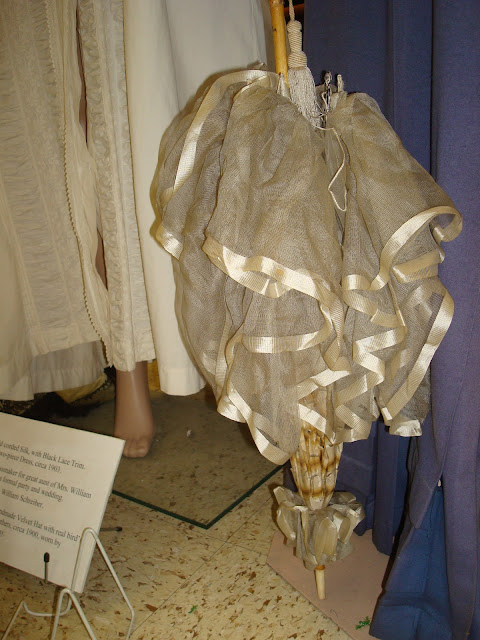 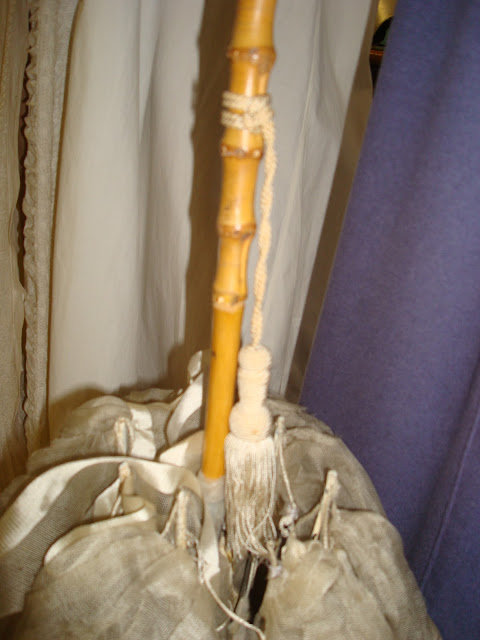 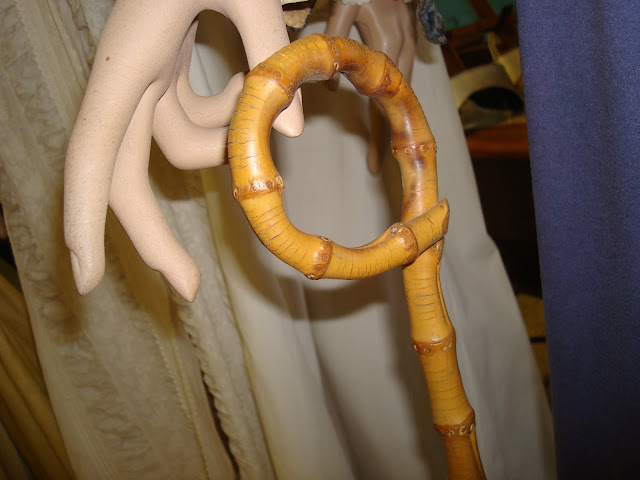 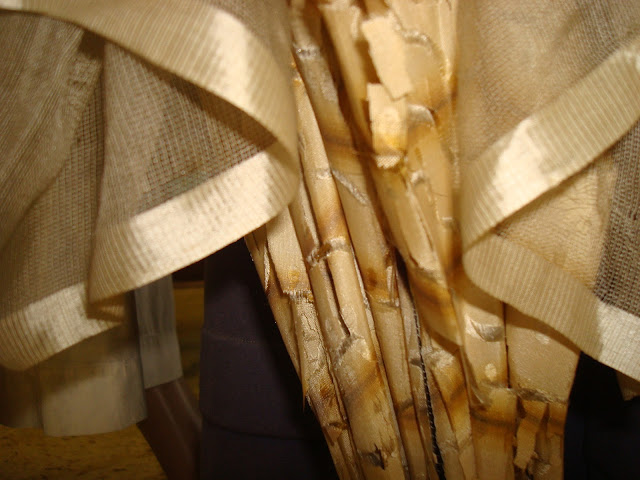 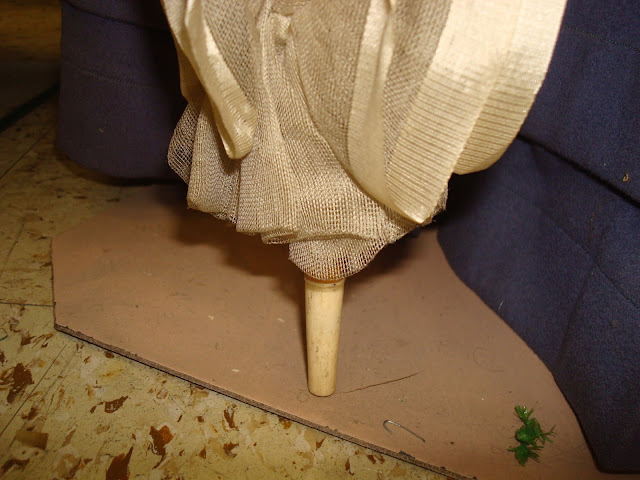 This mink fur muff is the only fur piece in the museum. It is lined in brown cotton. It is sturdy and in good condition, although in some places the cotton lining has become unsewn from the fur. A layer of cotton canvas (?) is between the fur and the lining. A small piece like this would've been an economical way for a woman to express the wealth of a middle-class income, without having to make such an expensive investment such as a fur coat.

This hat was actually made by a woman of Kearny, Florence Parisen Kennealy. The hat has sadly suffered from direct exposure to the sun underneath the enormous skylight; it has become a faded vestige, having lost all of the grandeur of its luster. The dusty blue plumes have faded to a barely-there blue; the cornflower blue velvet ribbons are limp and pale. The hat is made of straw, and has two rather large black stains on the crown, which I speculate might be mold or moisture damage. The brim is covered in a layer of tulle embroidered with large, plush blue flowers, and a blue velvet ribbon lies between the brim and the crown. Larger velvet ribbons underneath the brim form an expanse of several large (though deflated) bows along the back of the hat. 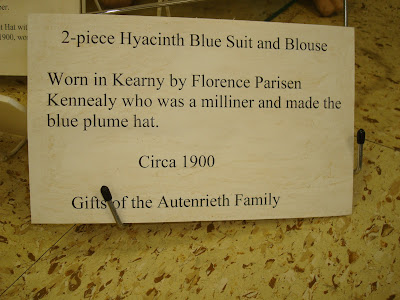 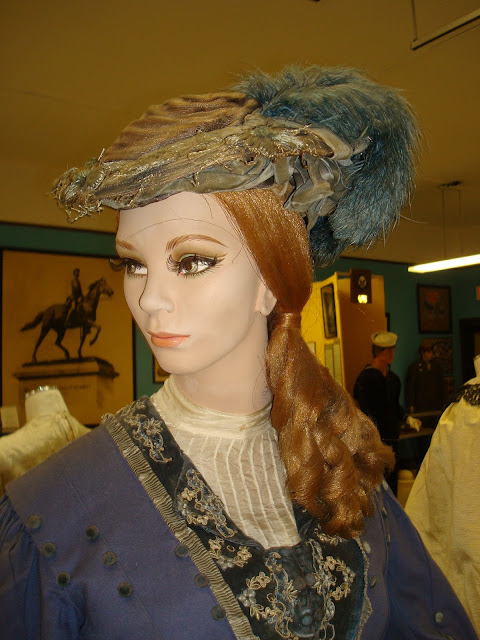 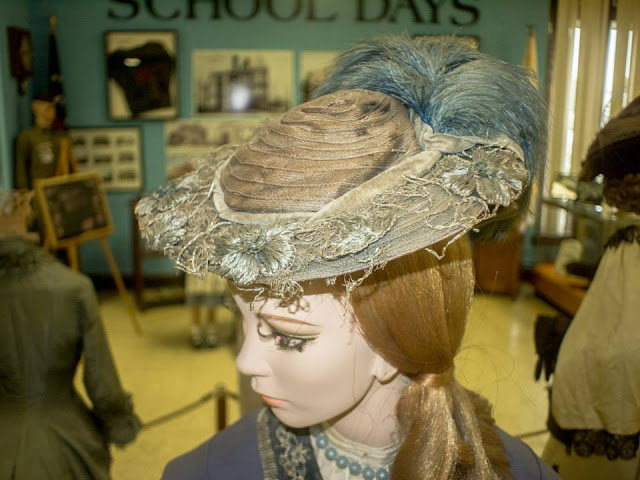 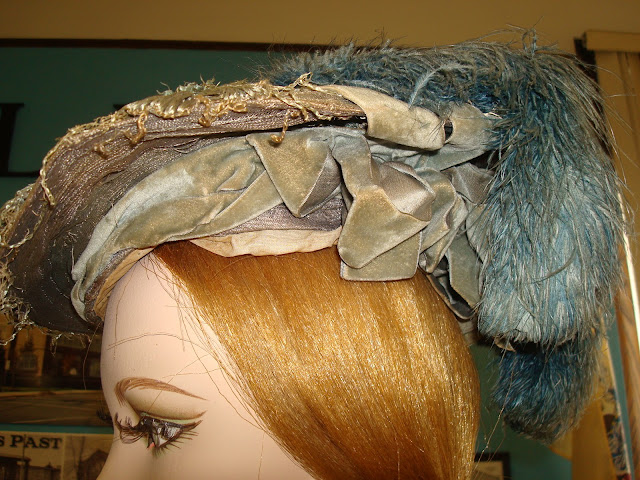 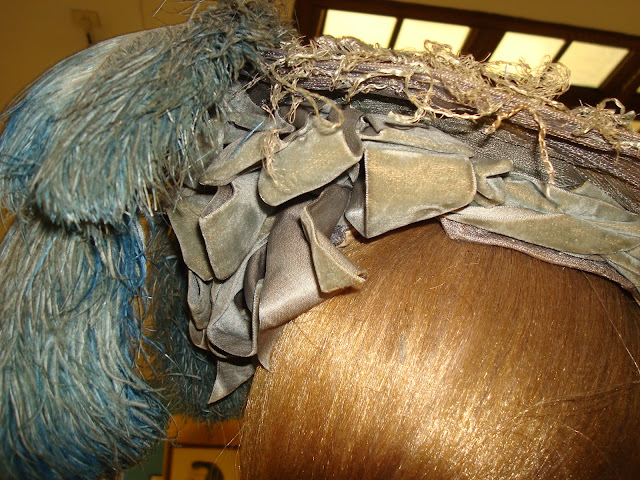 I stumbled upon the most marvelous resource for us costumers, history afficianados and art lovers!

The Metropolitan Museum of Art has an online, free library of almost 700 titles, free for anyone to access and read!

"MetPublications is a portal to the Met's comprehensive book and online publishing program with close to 700 titles published from 1964 to the present.

Readers may also locate works of art from the Met's collections that are included in every book title and access the most recent information about these works in Collections." 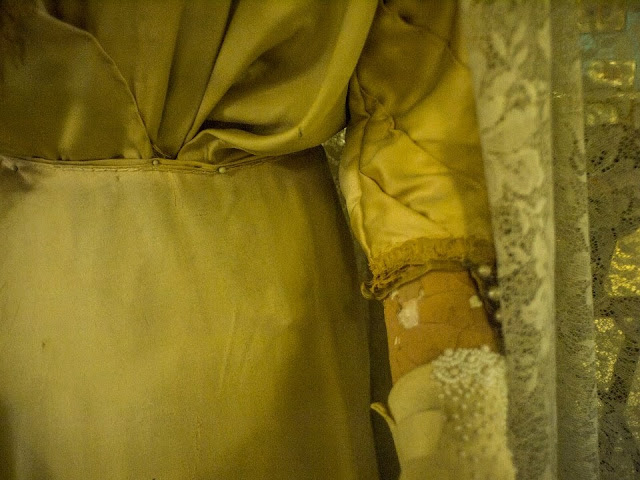 Although donated by the same family that gave the 1870s green silk bustle gown to the Kearny Museum, this 1909-14 silk and lace wedding gown was improperly mislabeled as being part of the bride's trousseau in 1870. This wedding dress is as far from the 1870s as you could get...elbow length pleated sleeves, lace insets, pearl and rhinestone decoration, a slim, straight skirt with a slight train and a drapey swag of fabric. These elements coordinate with dresses from 1909-14.

Not only was this dress on the worst mannequin in the whole exhibit (the most crackly skin and weirdly hunched pose), the dress had suffered some kind of weird moisture damage, which left enormous, stiff stains and discoloration along the back of the dress, and mold on some of the lace.

The biggest surprises in this "dress resurrection" were what I found when I removed the dress from the mannequin. The mannequin itself was nightmarishly horrifying; rather than an actual midsection, it had this weird concave midsection made of a mesh material that had also soaked up its fair share of whatever leaked through the skylight. The mannequin also wore a short Edwardian petticoat, which was terribly stained from--you guessed it--moisture damage. The silk lining of the dress fared the worst in terms of damage; it was completely shattered, with only a few threads holding down bones, hooks, and eyes.

The wedding gown is constructed in one piece. It fastens along the left-hand side with hooks and eyes, as dresses of this period usually do. It fastens with more hooks and eyes around the front of the armscye, along the shoulder, and up the high lace collar. The lace collar still has it's original stays, though they were attached with tape. The decorative silk swag is attached at the left, swings across the waist, and is fastened at the right side seam. I couldn't get many photos of the inside because I wanted to handle this dress as little as possible.

I decided that the best upgrade I could give it at the moment was to put it on one of those more modern mannequins, of which now I had a few naked ones lying around. This display is still by now means perfect (really due to the mannequin's awkward pose) but it still succeeds in highlighting the actual dress, instead of swamping it in layers of synthetic, dirty lace fabric and questionable styling choices.