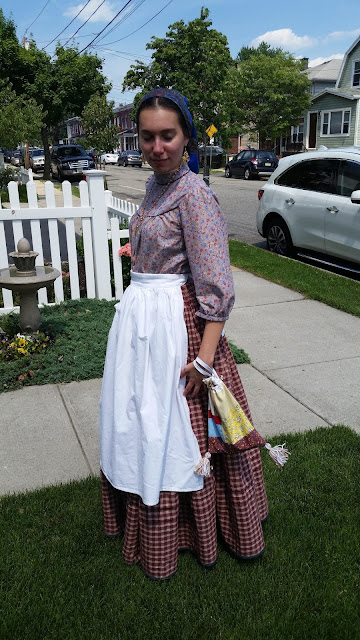 So I had my petticoat, my shirtwaist, and all my accessories ready for my interpretation of a Portuguese marketwoman of the late 19th century/early 20th century...but what about my skirt?? Making this skirt was a mad rush before the event (as most sewing tends to be!), and took me only about 6 hours to complete, which included cartridge pleating 5 yards of material!

The following 20th century photos are from Trajar do Povo Em Portugal, a Facebook page which documents clothing worn in Portugal by all social classes during the 19th and 20th centuries:

My skirt is made from 5 yards of this burgundy and cream plaid homespun from Joann's. Five yards created a perfectly full skirt, but presented some challenges when it came to sewing. Between the application of bias tape in lieu of a hem, adding a hem facing, and adding 2 tucks, the skirt has 25 yards of machine sewing alone!

The historical accuracy of the skirt is, in my opinion, extremely high. The skirt was sewn cut edge to cut edge, with a 9 inch long gap left at the top of the seam. As mentioned above, my skirt has a 10 inch tall hem facing made from blue Kona cotton, as found on many extant skirts and nearly all modern reproductions. Two 1 inch wide horizontal tucks above the facing keep the skirt at ankle length--the fabric was never cut, just adjusted to my size to reduce waste. The raw edges of the bottom of the skirt and facing are enclosed in 1/2 inch wide grey double fold bias binding, also seen on period and repro pieces, as a way to reduce wear on the skirt fabric itself.

To create the cartridge pleats, I folded 3 inches of fabric down, creating two layers of fabric at the top of the skirt to add dimension to the cartridge pleats. I then sewed four lines of running stitches every half inch (Warning: this process takes forever). I finished the top of the skirt with grey double fold bias binding, which extended into waist ties. 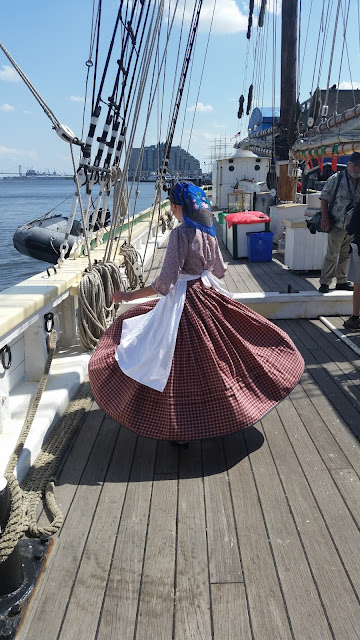 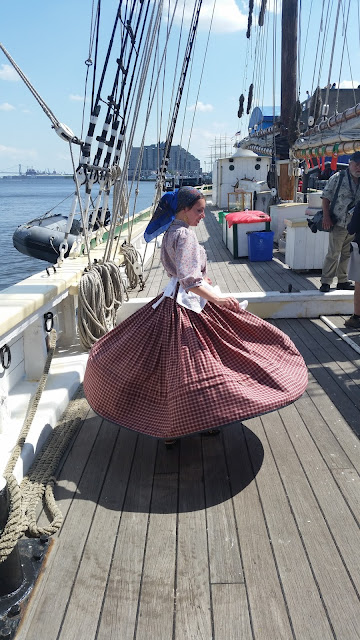 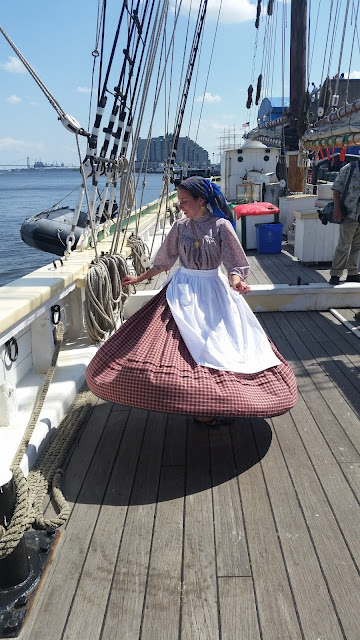 This skirt was easy, inexpensive, and authentic. In my opinion, it captures most accurately the experience of a home sewer of the late 19th century/early 20th century in Portugal and other rural areas. The skirt is dramatic, durable, and cost less than $20 to create, including notions!


Have you ever worked with homespun fabric before? Share your projects in the comments section below!
3 comments: 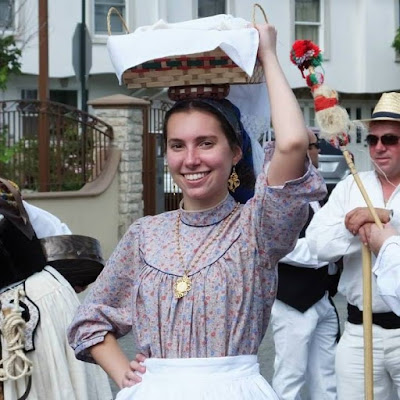 I used the Folkwear #205 Gibson Girl Blouse pattern to create a blouse worn by women in Portugal during the late 19th and early 20th centuries, as supported by photographic evidence (which you can read about in my post here). I made the blouse out of vintage floral cotton, with tones of pink, purple, blue, and white.

The blouse is constructed with French seams on the sleeve seams, shoulder seams, side front seams, and side back seams. The seams between the sleeve and bodice, and yoke and bodice, were left unfinished because I couldn’t figure out how to make a French seam with gathered fabric and piping. I plan to cover these unfinished seams with bias binding eventually. 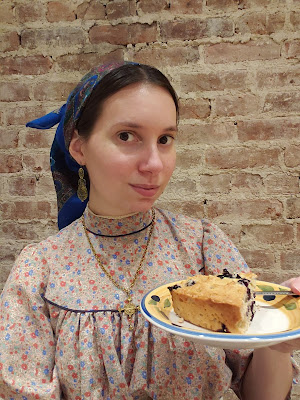 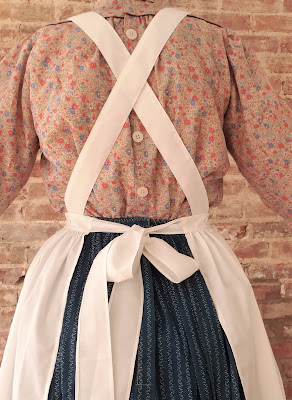 Changes to the Pattern:

Overall Thoughts:
I LOVE this pattern! The construction was easy and intuitive, and the blouse only took about a week to create. The final result is flattering and very comfortable to wear (and it looks so cute with jeans). I will certainly make more Gibson Girl blouses in the future, and the pattern includes enough varied options for decoration (such as lace insertion and tucks) that I could create multiple “looks” from this pattern.

What made construction of this blouse difficult was my choice to add the lace trim to the collar and the piping. It was difficult to get the piping evenly sewn between the seams, but this is
purely my inexperience with using piping. The effort was worth it though, because the piping helps break up the heavy floral print, and adds a unique dimension to the blouse.


Have you ever made the Folkwear #205 Gibson Girl Shirtwaist/Blouse pattern? What was your experience with it?
7 comments:

Though I haven't been blogging much, I have been busy sewing and working on my Historical Sew Monthly entries!

Initially, I planned to submit a Medieval veil I finished at the beginning of July for Challenge #7: Accessorize, but then the black velveteen I ordered to create a robe de style ended up being very stiff and even dirty (!!!) in some places. I was so upset about the velveteen that I just wanted to make something small to get it out of my stash so that it could stop mocking me! I needed a small, quick project, that could use the clean areas of the velveteen and the fabric's stiffness to its advantage...like a little handbag!

You may have realized my affinity for drawstring purses, since I made a Harry Potter-inspired one, various embroidered models, and a patchwork design. I decided to make an Edwardian-inspired velvet purse, with a hand-beaded fleur-de-lis motif (as this was a gift to a beloved professor).

The beaded fleur-de-lis motif is done in the same antique bugle beads as on my 1920s dress, and modern small flat sequins. The purse is lined in polyester satin. It fastens with a wide black polyester ribbon. 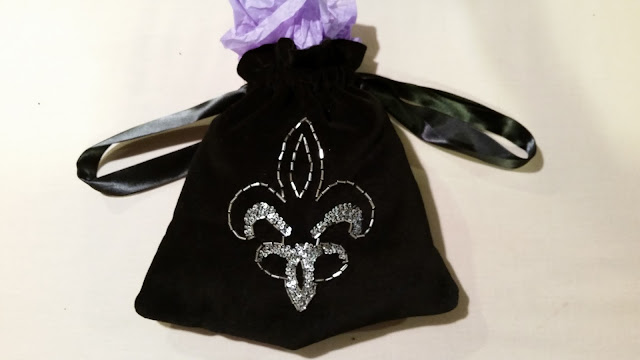 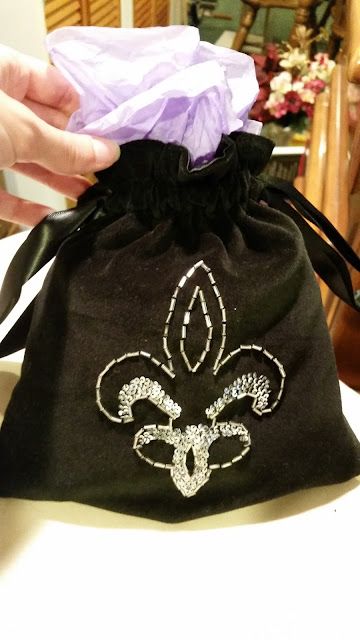 Expect a tutorial on how to make and bead this bag to be up on the blog in early September!

The Challenge: #7 Accessorize
Fabric: Black cotton velveteen, black polyester satin
Pattern: Self-drafted
Year: c. 1900-1912
Notions: Thread, antique bugle beads, flat sequins
How historically accurate is it? Fairly accurate, except that period examples tend to hand much more beading.
Hours to complete: About 9
First worn: Not sure, as it was a gift
Total cost: About $5
1 comment: