The brown petticoat I made from a sheet from my 18th century undergarments post, sadly, ripped. I wore my Chemise a la Reine outfitted as The Ghost of Christmas Past to school on the day before Winter break--merely by swapping out the pink sash with a red and gold cashmere one, and adding a festive crown of garland. At the end of the day, I noticed that the left hand side of the back panel of my petticoat had several large horizontal rips--perhaps someone or myself stepped on it with too much force.

Being that during summer break I had a lot of time to flex my sewing muscles, I picked apart the petticoat, leaving two panels (a front and a terribly ripped back) and their respective waistbands (set aside for now). I cut off the ripped half of the back panel, and sewed in a new panel. However, I figured since I already had the skirt's seams undone, I might as well make it wider--my original petticoat didn't have as much "fluff" and "bootylishisness" as I desired. So, I doubled the petticoat in width, adding a huge panel the same width as the original width of the petticoat. I sewed it all up, repleated it, and made a new waistband--slightly wider in case one of my friends needed to wear it or something, or to accommodate a future false rump. 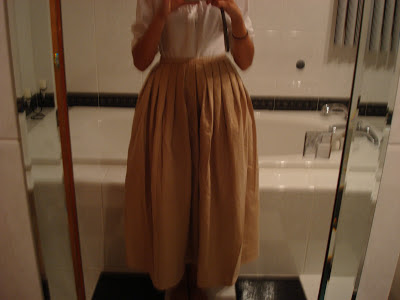 Since my mom:
1. Tolerates my sewing and how every time I sew the carpet gets covered in little bits of thread
2. Buys most of my sewing material
3. Helps me fit garments and offers constructive criticism
4. Loves me

I decided to return the favor and sew a dress for her. I let her pick out the pattern and the fabric, but I took some creative liberty with the pattern instructions to give the dress a really nice look. The pattern she picked was McCall's 6557 . 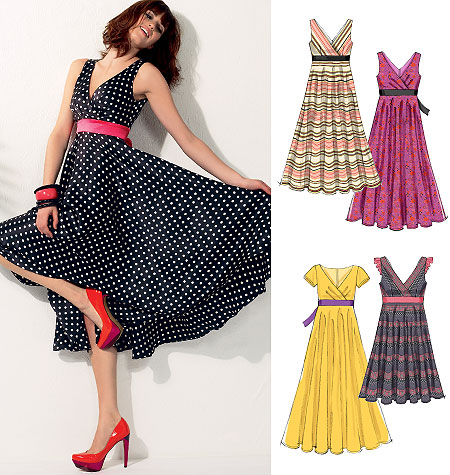 My mom chose a shortened version of View C, which the model is wearing. I used the skirt length from view A, the shortest length, since my mom's on the petite side.

She was inspired by the pattern envelope and picked out a sheer, lightweight black chiffon with delicate, small white polka dots. We decided not to do the contrasting waistband, but instead go for a mature, vintage-y look. 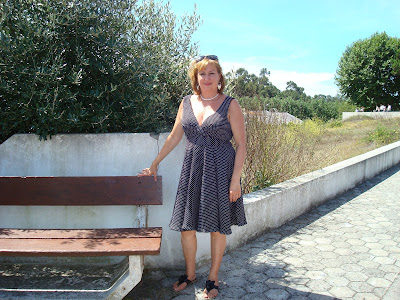 I loved the full circle skirt, and thought it very flattering on my mom. The dress involved a fair bit of hand sewing, as I hand sewed the zipper in and blind hemmed the skirt (so that the fabric could maintain it's swishy-ness!). The pattern instructions said to stitch across the front wrap part of the bodice, but because of aesthetics and the fabric, I stitched through the lining to catch all the layers of the bodice fabric. It did look nice! 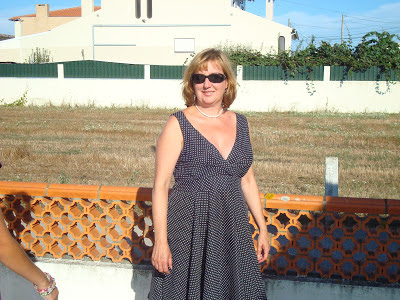