I was perusing the after-Christmas sales in Macy's with my parents when I saw something that made my blood pressure plummet. Several racks of elegant and and glamorous jewelry, with Downton Abbey in lovely script above each piece!

Macy's is now carrying a Downton Abbey Jewelry Collection which is to die for! The necklaces, earrings, bracelets, and brooches recreate the lovely arabesques of Belle Epoque jewelry.

Of course, we aren't all actually lords and ladies, and so the collection's pieces are made of materials that imitate the historical look. The collection even includes imitation jet jewelry! The pieces are affordable enough to build a stunning demi-parure.

Some of my favorite pieces from the collection include...


Which is your favorite piece?

This olive-green silk 1870s bustle gown at the Kearny History Museum was stuffed with newspaper (the only thing that cheered me up about this was that the newspaper was a rather kitschy spring wedding spread). I've been working on this bustle since I completed the Bronzino Gown, but school and a few technical errors impeded the timely completion of this piece. 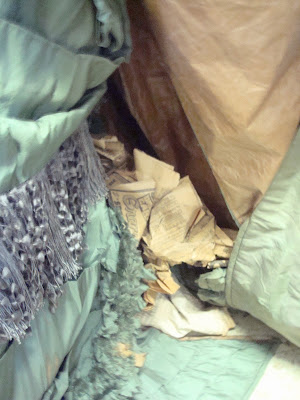 I made the bustle using Truly Victorian's 101 Petticoat with Wire Bustle. I purchased the pre-cut, pre-tipped boning from TV as well. The bustle is made from unbleached muslin and twill tape. I also flat-felled the side seams. I'm in the process of making the ruffled overlay.

This was my first time tackling flat steel bones and the Victorian silhouette, and I admit that I wasn't entirely successful. The hem tips upward in the back, and I realized after I inserted the bones that I was supposed to apply the twill tape bone casings to the outside of that upper back piece. Since the bone casings are on the inside, the bones threaten to stretch and poke through the muslin...I've done my best to soak the muslin around the tip of the bones in Fray-Check and that seems to have helped. There is also a strange concave depression between the horizontal bones, which I hope won't be as noticeable once the ruffled overlay is attached.

Displaying the bustle on my dress form was a little tricky because my dress form's hips and waist are far too big. My hips are too big for it too, but the bustle fits my waist measurement!

How to Sew on Buttons--Easy and Professional Finish

Granted, it took me years to understand why the buttons I was sewing were so sloppy...the threads weren't uniform and no matter how neat I tried to be, my re-sewn buttons couldn't compare to the factory-sewn buttons on the rest of my garment. Until I took a closer look and realized that I (and probably many others) were doing it all wrong!

In factories, buttons are attached with multiple threads in just one motion--like using embroidery thread (which is comprised of 6 threads). This way, the threaded needle doesn't have to keep going up, and down, and up, and down, etc. You just sew through the shank/holes (depending on type of button) once! Of course, this can be done with embroidery thread, but if that's not available you can use this tutorial to simulate that look.

Supplies:
-Thread, Needle, Scissors/Thread Snips
-Button and Garment to which it will be sewn
-Tailor's Chalk (optional)

If the button has fallen off a garment, such as my coat above, then keep the original thread in it's place for as long as possible. If you feel the button start to loose with wear, pop it off but keep the thread on the garment. The thread will serve as our guide for where to place the button. Alternatively, you can use Tailor's Chalk.

Cut 6 lengths of thread, about a foot each. You can cut up to 8 lengths of thread if you prefer, but bear in mind the weight of the buttons/garment you're working with. Anything longer than a foot becomes difficult to handle.

Level off the other end of the threads and thread the needle.

If you have a 4-holed button, repeat the previous steps. Make sure that the thread isn't holding the button too tightly to the garment. Bring the needle up through the first hole left by the original thread, and loop the thread around, securing your button.

Bring the needle down through the second hole...

...And tie a double knot. Clip and discard the excess thread!

I hope this tutorial helps! I know it's not a sewing breakthrough, but it really took me years to figure out what I was doing wrong. This method is fast and easy, and you couldn't tell my re-sewn buttons from the factory-sewn ones on my coat!

If you remember, underneath the 1909-14 Silk Wedding Gown was a surprisingly filthy Edwardian petticoat. The petticoat did nothing for the shape of the dress, but it seemed to have somehow absorbed whatever was leaking from the ceiling onto the dress...

Interestingly, the upper folds and waistband seem to be the worst areas affected by the moisture damage, but the entire petticoat is dirty. This leads me to believe that it was left dirty before it was even displayed under the wedding gown (Hint: don't put dirty petticoats under antique gowns).

I had to wash it before storing it. I took a deep black basin from the staff kitchen of the library and soaked the petticoat in water. I let it soak for 24 hours and tried not to agitate it, since it had a few tears. The petticoat really needs a decent wash and more time soaking (maybe some soap, too). Within minutes the water looked like urine and now I'm really curious as to what was leaking from the ceiling and what was dirtying up this petticoat!

I was so curious, in fact, that I took a sample of the water post-wash. After about two weeks, something must've happened to all the oxygen molecules because the sealed bottle was all sucked in. Also, something rather brown and dust-like had settled at the bottom of the bottle...