I began this "Unfinished Object" in the spring of 2012, while I was still in high school and just being introduced to the Edwardian period. I wanted to try out the Costumer's Manifesto free c. 1905 Shirtwaist pattern. In the dawn of my historical sewing, I printed the pattern and scaled it up with a whole lot of guesstimating...I remember taking the measurements listed around some of the pattern pieces and using ratios and some kind of made-up algebra to determine the missing measurements. I could've spared myself the brain damage by just buying some french curves.

This was my first experience in making pintucks. I used a really convoluted method wherein I measured half the distance of the pintuck from its middle point, drew lines, and then matched them up. I believe I found this method online, but it produced squiggly, sloppy pintucks and was difficult. I put the project away after I burned a few fingers on my iron trying to smooth out these little devils--I just needed to literally cool down a bit and see how others made pintucks. 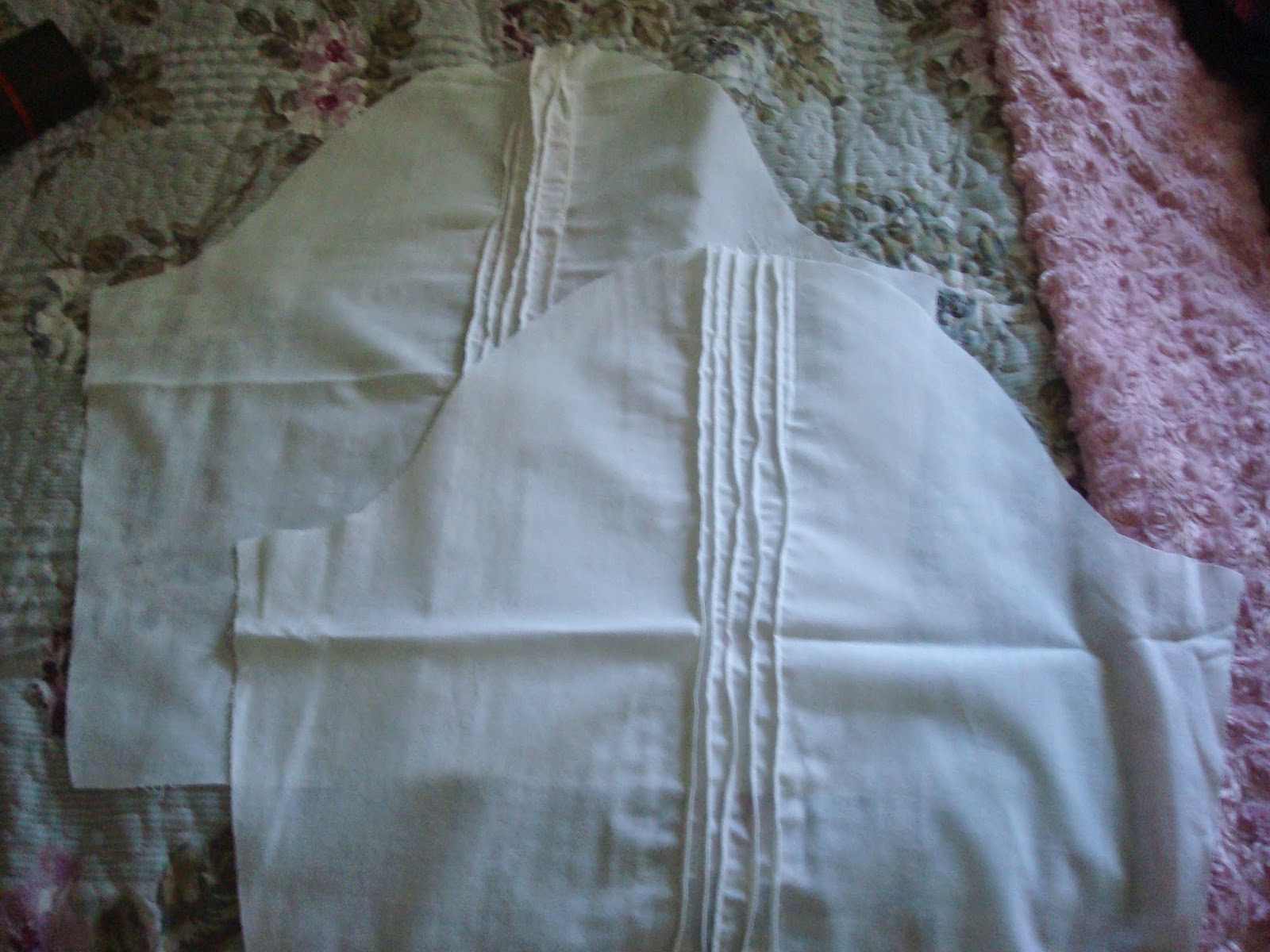 I picked this up again as soon as my semester ended just to have some noncommittal, easy sewing. I painstakingly ripped out each pintuck, and sewed new ones by simply folding the fabric, pressing, and sewing. It is a much simpler process and produces a more uniform set of pintucks.

The shirtwaist is made of the same cotton lawn as my Italian Renaissance Camicia, salvaged from an old sheet.

I couldn't find insertion lace that I liked until the summer of 2012 when I was vacationing in Portugal. At a large outdoor market in Oliveirinha, Aveiro, I found a vendor selling all sorts of beautiful, cotton machine-crocheted lace that looked so far from that shiny, stiff stuff at Joann's. I miraculously found a perfect lace insertion--for only 40 cents a meter!! I bought the whole stock the vendor had (a little over 4 meters). 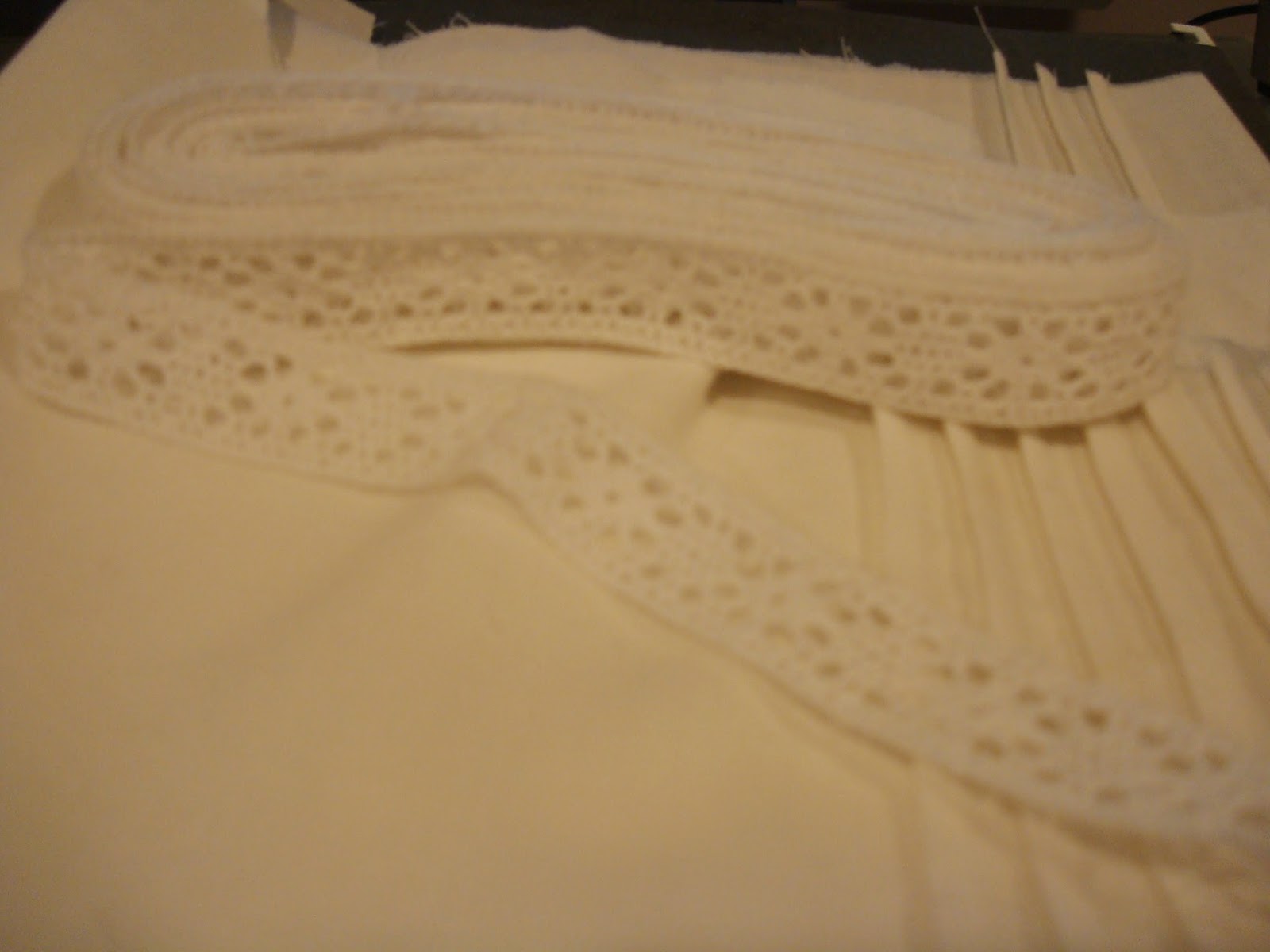 Have you ever found the perfect lace or trim in an unusual or unexpected place?
1 comment:

Over four years ago, I used Butterick 6196 to make the blouses for the Italian Tarantella costumes. In my innocence, I followed the pattern instructions religiously, not questioning impractical or complicated steps.

Since two blouses ripped along the side seam last year, I had to make two new ones before this year's performance. With the new blouses I wanted to address some issues with the previous ones:

1. Finish the seams to prevent fraying of the fabric and to make a stronger seam.
2. Figure out an easier way to hem the sleeve.

Butterick 6196's instructions for the blouse do not mention finishing the seams in any way. The seam connecting the bodice and raglan sleeve is stitched twice, first with a normal seam allowance and again 1/4 inches away in the seam allowance. I found this to be stiff and scratchy, and in the end it didn't prevent the seam from ripping after several performances.

My Blouse 2.0 was made with french seams on all seams. This helped to make the seam both strong and unfrayable. The aesthetics of the blouse also improved as you couldn't see the raw edges through the sheer fabric anymore, and dangling frayed threads were eradicated. Though it took twice the time, it was worth it.

Butterick 6196 has you put elastic in a casing near the wrist of the sleeve, sew the side seam of the sleeve, and then hem the sleeve (with a narrow hem, no less!). Now, imagine this: nearly 2 feet of fabric gathered to a circle of about 4 inches in diameter. Turning a hem, narrow or otherwise, becomes extremely difficult and time-consuming as you try to wrangle the curved and gathered fabric.

On Blouse 2.0, I hemmed the sleeve before putting in the elastic and sewing up the side seam. This way, I had a flat expanse of fabric to hem, rather than a tightly scrunched ruffle. You can see the difference in the photo above. The drape of the ruffle created by the elastic casing is positively affected by the nicer, neater hem. Hemming it this way was both easier and faster.

For the neckline elastic, Butterick 6196 instructs you to create the elastic casing out of bias binding. As the neck area is so large, I found this both wasteful and fiddly. I created the casing by creating a 1/2 inch hem along the neckline of the blouse.

The pattern instructs you turn the lining of the bodice to the inside, sew the shoulders together, and trim the edges of the bodice in 1/4 inch wide ribbon.  This was difficult to manage with a boned bodice, so instead I put the lining and outer fabric wrong sides together and stitched along the lower, front opening, neck and armhole edges. The raw edge was then covered in 1/4 inch bias binding at the advice of a sewist neighbor. Sewing ribbon to all those curved edges would have been nightmarish!

If I ever make this bodice again, I will also change the boning layout. The boning cases are arranged in the middle of the side back and side front pieces. Taking inspiration from period garments, I would instead put the boning along the seams.

Do you usually follow pattern instructions to a T or disregard them?

The Italian Taranatella costumes I made were brought out of storage again for their 4th performance! Considering my skills have dramatically improved since my high school sewing days, I'm pleased to see that the costumes have held up to the jumping, spinning, and kicking of the Tarantella.

The performance was held in the gymnasium this year due to rainy weather. The following dancers are all different from the dancers of the first performance 4 years ago, but the costumes are adjustable enough to fit them reasonably well. Also, you can see the vests and sashes I made for the boys. 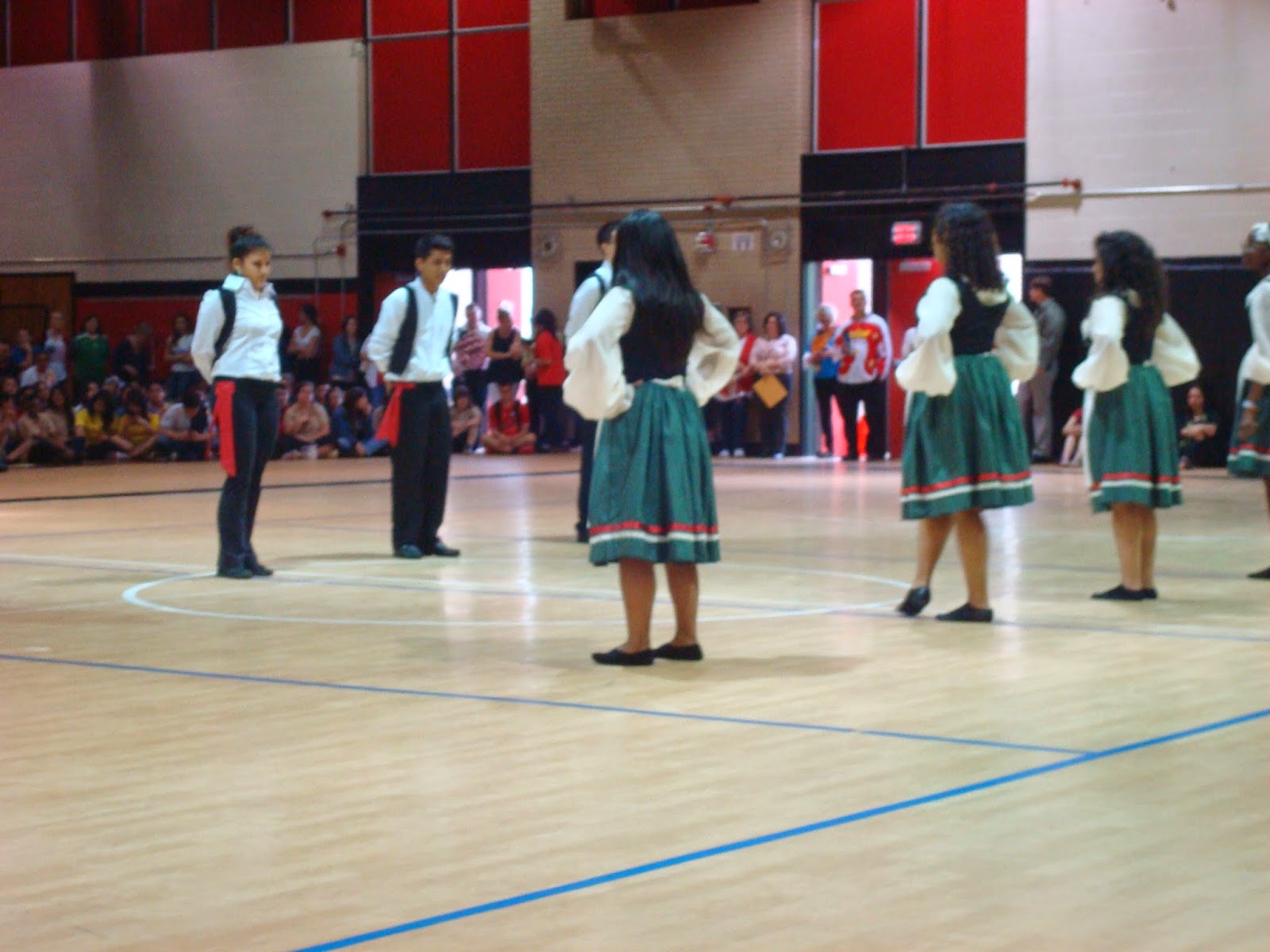 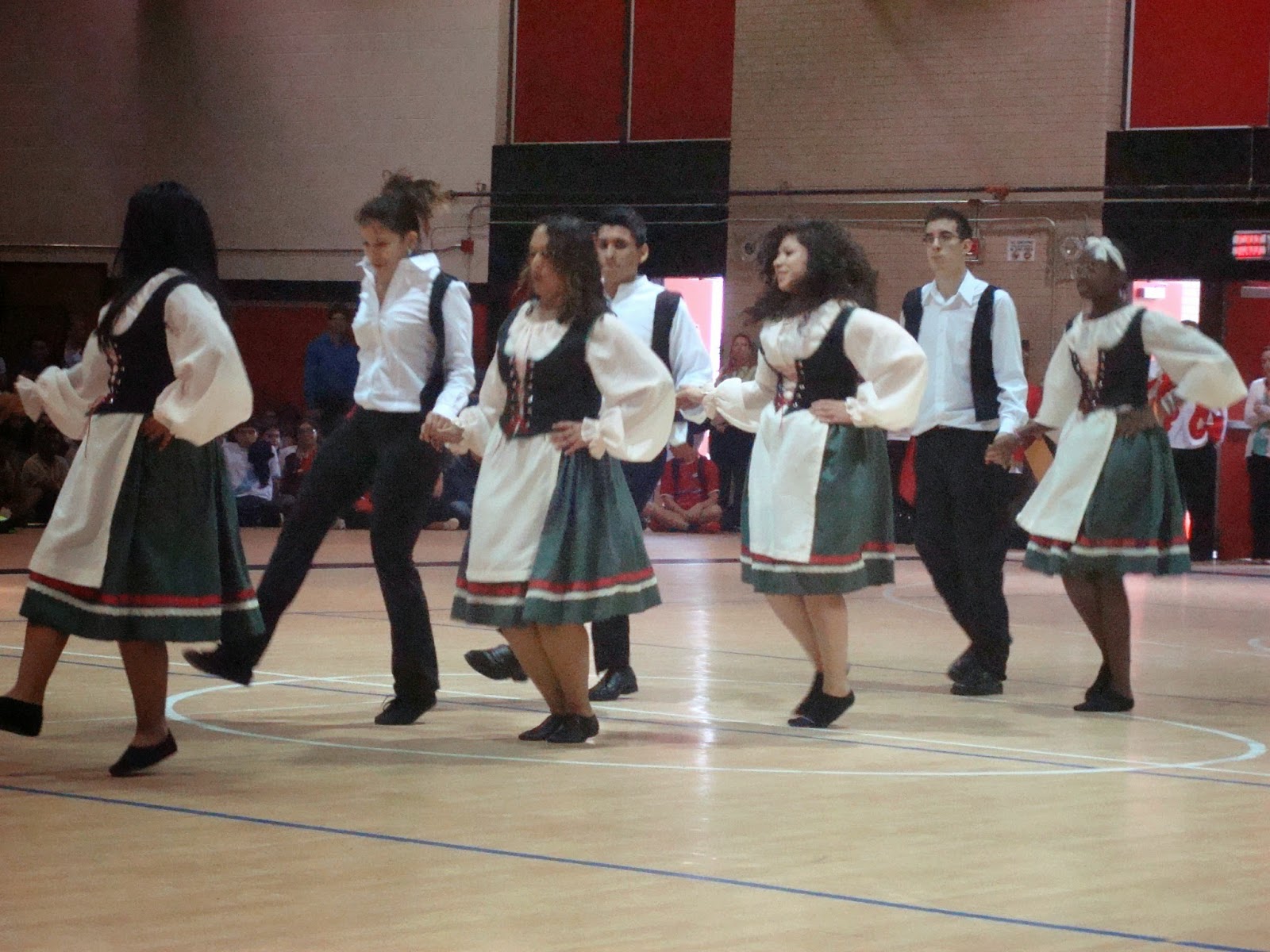 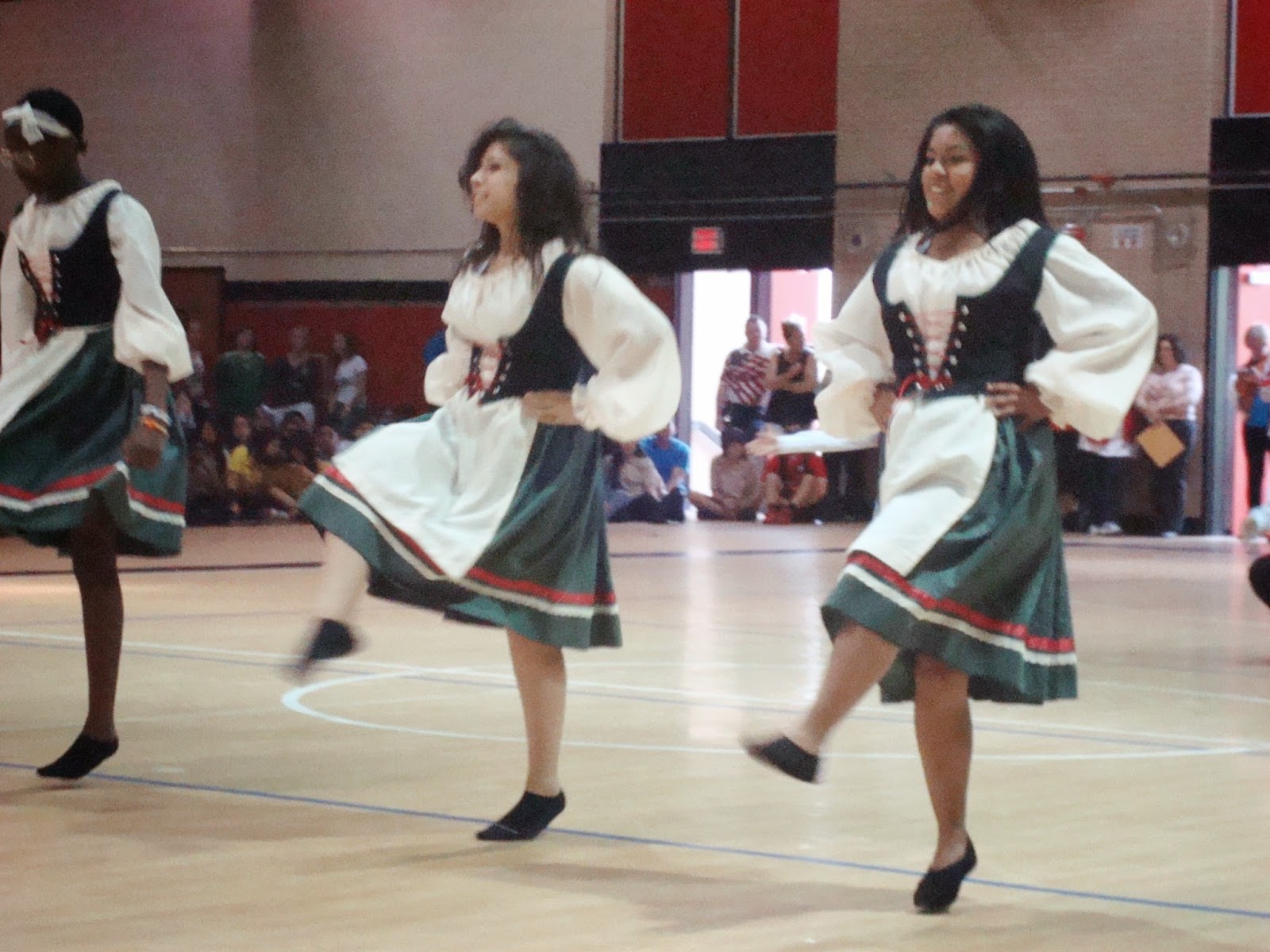 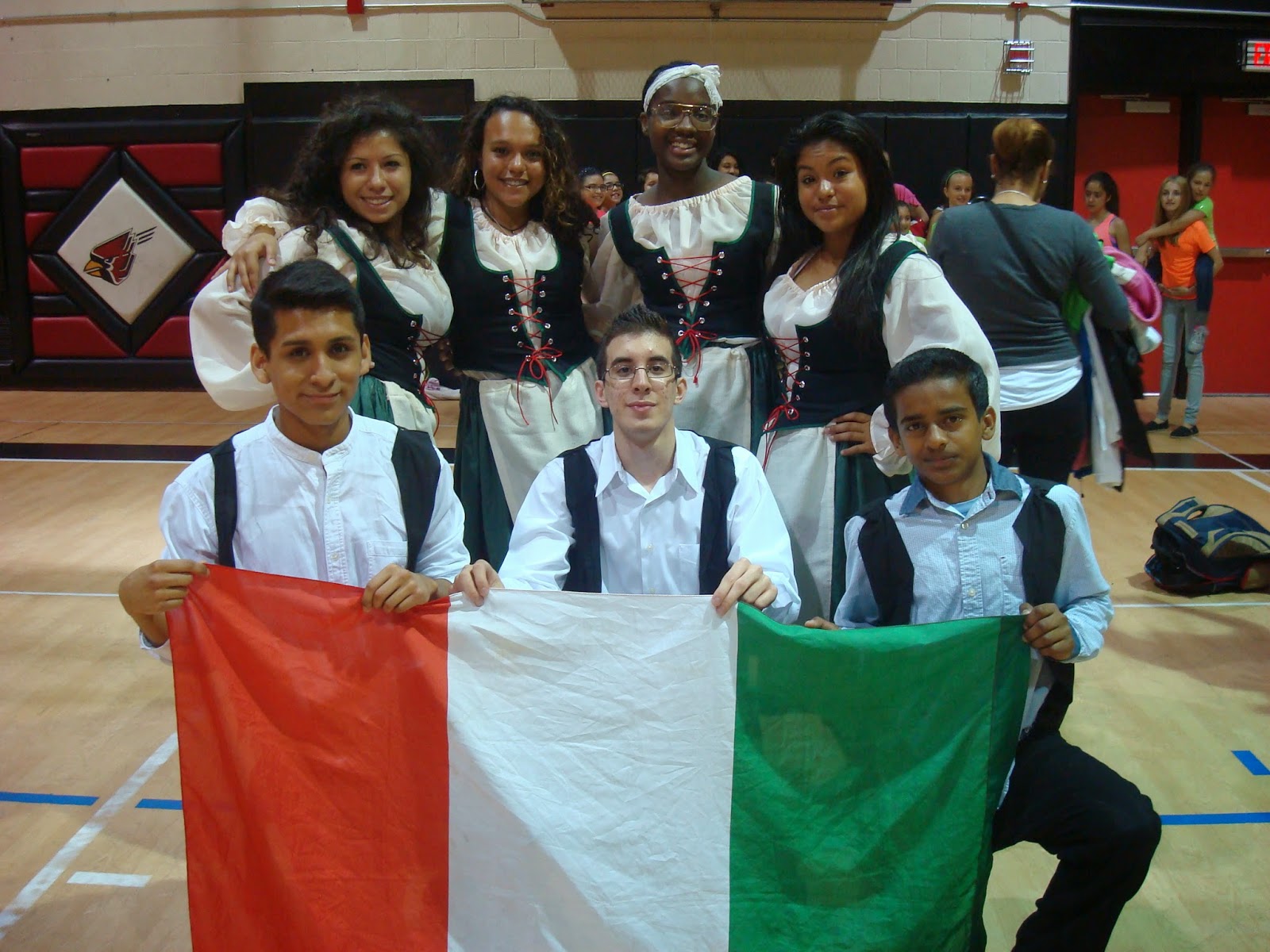 Each year, I clean and repair the costumes, and this has prolonged their lifespan. You'd be surprised at the amount of makeup, sweat, and glitter that end up on the blouses...

Last year, two blouses tore at the side seams, making them unwearable. The tearing was partly due to the crazy fraying nature of this mystery polyester fabric. I made two new blouses utilizing new techniques and ignoring the pattern directions, which I'll discuss in my next post!

Have you ever made a costume that outlived its anticipated lifespan?
No comments:

Burdastyle Magazine US: A Big Disappointment

Like many sewists, I was ecstatic when Burdastyle announced their United States edition of the Burdastyle magazine. I eagerly signed up for the yearly subscription, and received the Spring 2014 issue last week.

The Good
Unlike my Portuguese issue of Burdastyle magazine, the US edition is thicker, with a strong binding and pattern instructions printed on glossy paper rather than newsprint. The pattern sheet also feels thicker and sturdier. Instructions were printed in a larger, easier-to-read font. This is where the positives of the magazine end...

The Bad
Also unlike the international Burdastyle magazine, the US edition has much more advertisements and features. As a Public Relations student, I just see pages and pages of press releases translated into product placement; an example is the two-page spread on makeup and hair products. Really? If I wanted the season's "hottest hues and makeup musts," I'd read trash like Seventeen or Cosmopolitan. This issue also contained more advertisements than its international counterpart.

There are also no children's patterns included. Not that I have children, but if ever I have to make a Christmas or birthday gift, patterns would be nice to have.

Also, it appears that the US edition is merely recycling patterns that first appeared two years ago in the international issues. Why?

The Ugly
The cover beckoned with an enticing "20 Full-Size Fashion Sewing Pattern Insert, +23 more style to download!" and in the editor's note "43 original BurdaStyle designs." I delightfully found patterns that would work perfectly with my wardrobe, like the Cropped Cowl Top and the Tiered Mini Skirt. I scanned the instructions and was excited to see how easy these patterns were to sew up, but wait...where were the patterns? Not in the pattern insert, but online...for $5.99 each!

What? More than half of the patterns in the magazine must be paid for separately. To my understanding, the Winter 2013 issue included patterns with a free download code...why not in this issue, too? According to one blogger, buying all the extra patterns would total upwards of $130 per magazine!

As it is, the magazine is half glorified advertising--between the pages of pattern drawings, instructions, and photo spreads of patterns that must be bought separately and the irritating features.

The US edition is disappointing and misleading:  it took me an hour to realize that over half of the patterns weren't in the magazine and had to be bought separately. All 43 styles are featured in the "Styles at a Glance" section preceding the instructions. Why? Nowhere in the magazine does it say that 23 of the patterns must be bought separately.

As a Burdastyle customer, I feel extremely  tricked and cheated with Burdastyle's bait-and-switch. Burdastyle, this is not the way to treat a new market of customers. Very unoriginal patterns and deceitful wording...this is not worth the investment.

I promptly reached out to Burdastyle and had my subscription canceled because I did not want to pay all that money for only 20 patterns, and a magazine promoting all the other patterns I want. I'm considering subscribing to the UK version.

Do you subscribe to Burdastyle pattern magazines? What has your experience with them been?
3 comments: 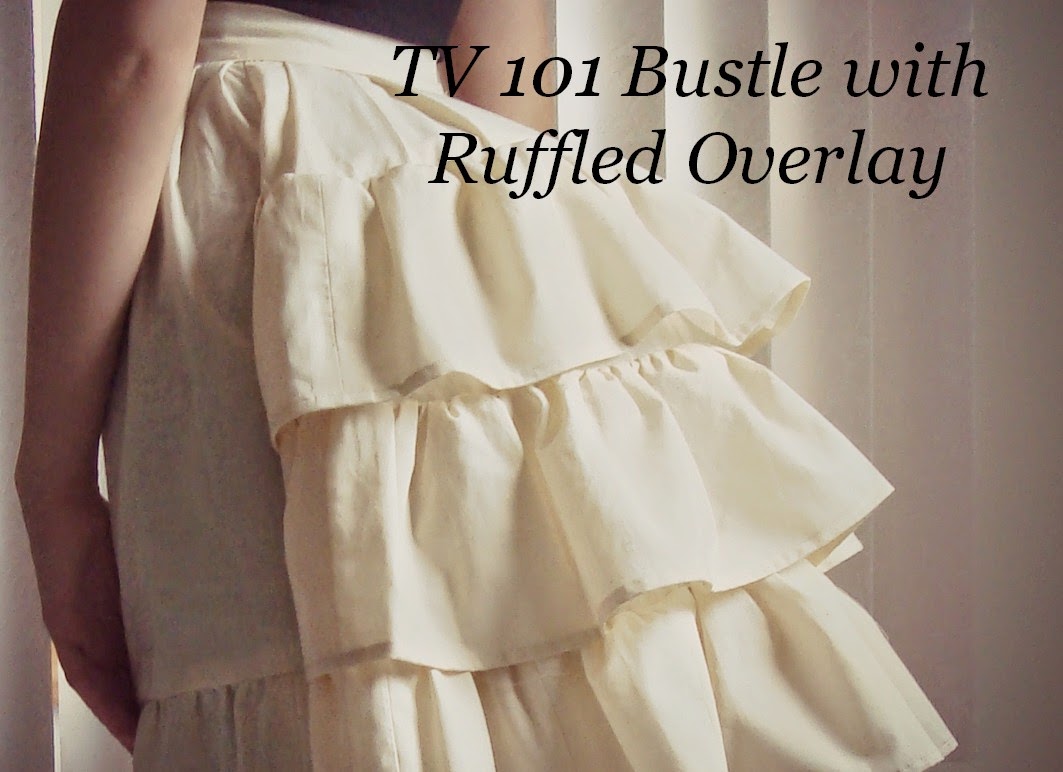 I began the bustle in September of 2012, and worked on it on and off throughout the past few months, finally finishing it in February. It is made in an unbleached muslin from Truly Victorian Petticoat with Wire Bustle 101. I made the ruffled overlay because the bustle will be used in my next mount at the Kearny History Museum: an 1870's olive green silk gown! The ruffled overlay will help support the heavy weight of the gown, of which the bodice back and skirt back are cut all in one piece.

I loved the pattern: the paper was thick and it was easy to fold back the sizes I didn't need. The bustle went together less than smoothly though...bottom line, don't tackle a new pattern with boning when exhausted!

It started going downhill with the boning. I sewed the horizontal casings to the wrong side, causing great frustration when it was time to apply the arched bone.

Then, with the ruffled overlay, I cut the ruffles all the same width...and sewed them on...then D'OH spent hours unpicking stitches. Finally I got the ruffles right, but realized that my overlay had one less layer of ruffles than it was supposed to. By that time I didn't want to take everything apart again, and left it. Then, I was possessed to unpick the waistband and sandwich the overlay between the waistband....what? For the sake of sanity, don't sew when tired! Because of silly mistakes, I used up 3 spools of thread: first white, then beige, then darker beige!

My biggest error was in sewing the overlay to the waistband. I now realize that it should've been sewn above the first bone. I'm not concerned about the short overlay, however, because I can supplement the shortage of ruffles with netting and more muslin when I'm mounting the gown.

There is no waistband fastening as the bustle will be sewn to the dress form, preventing points of stress between the silk gown and the hook.

This is my first time using a cover photo for a post. What do you think?
No comments: