The annual Sunday Tea, hosted by the Hobart Manor Revitalization Committee (of which I am a member) and held at Hobart Manor was coming up, and I decided to make a new dress (of course!) because I felt that my pink satin 1920s dress wasn't very flattering. Plus, this year's guest lecturer spoke about voting rights during the nineteenth and twentieth centuries, with a focus on if/how the characters of the beloved series Downton Abbey could vote.

I felt that the Downton Abbey theme was the perfect catalyst for trying my hand at the 1920's "One Hour Dress." This was a dress that supposedly could be cut and made in an hour, just in time for a spur-of-the-moment evening soiree.  I suppose the theory holds true if you don't count the time it takes to cut out the fabric, pin the pieces together (damn that slippery velvet!) and hem the dress by hand (necessary for the delicate chiffon and velvet)! 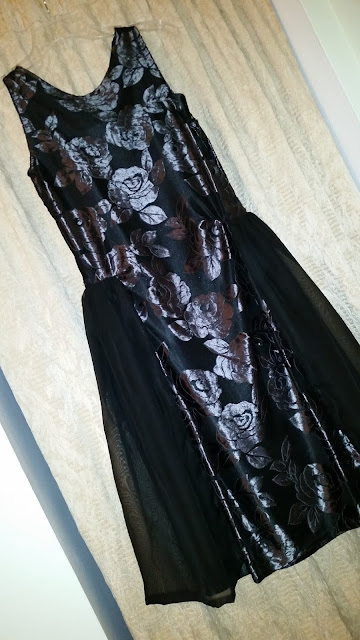 For this dress, I used some polyester devore velvet, or voided velvet, which I had bought last year, intending it for a 1920s dress. The quality of this fabric is poor; the velvet pile is very short, stiff, and bristly, and the mesh in between is actually a fine knit which snagged very easily; I actually have huge snags all over the side seams from inserting pins into the fabric! Since the fabric was a knit, it also had a tendency to curl and stretch at the edges, making pinning a nightmare. I swear that anytime I put in a pin, an invisible goblin immediately shifted it out of place! Also, I'm not sure if it was due to the fabric shifting or me not accurately cutting, but somehow one armhole came out 1 inch lower than the other! Both armholes turned out much lower than I'd like them to be.

Festive Attyre has a great One Hour Dress template, and I used this as the basis for my dress. I wanted to add chiffon panels at the sides though, so cut the dress straight all the way down (18 inches wide for the front and back pieces). At the slits at the hips, I folded the extra velvet underneath the chiffon panel. Each chiffon panel was 30 inches wide and gathered with 3 rows of gathering stitches.

Due to time constraints, I didn't finish the neckline of the dress. I didn't even know how I would without further snagging the delicate velvet fabric! Thankfully, it didn't fray during the event.

I love the design and final look of the dress. Despite its issues, I like the large floral pattern of the velvet and the way it catches the light differently at different angles. The dress embodied, in my opinion, both the 1920s aesthetic and the one hour dress silhouette. The fit of this dress is also substantially better than my first 1920s dress, the beaded pink satin number.

Yet, the velvet fabric has its flaws: snags, wonky armholes, and unfinished neckline. My initial plan was to bead the neckline and bead the negative spaces between the flowers, but I'm not sure if it's worth it because of this sub-par velvet. I might either remake the dress from the velvet I have left over, or splurge on silk devore/voided velvet instead. 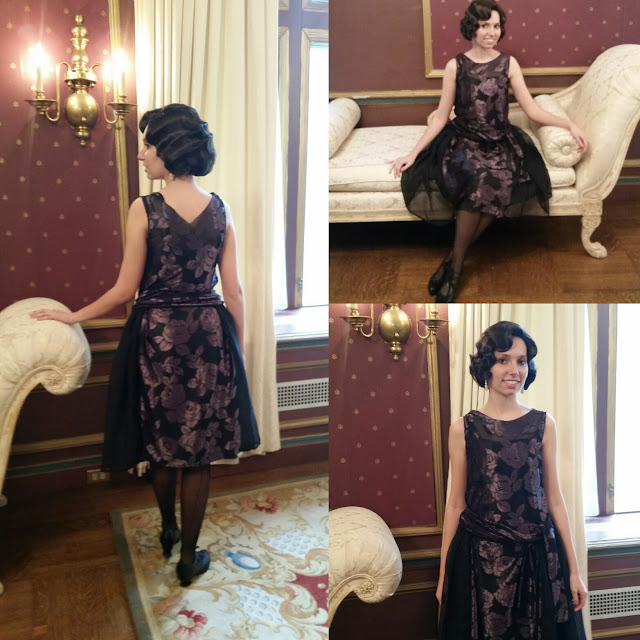 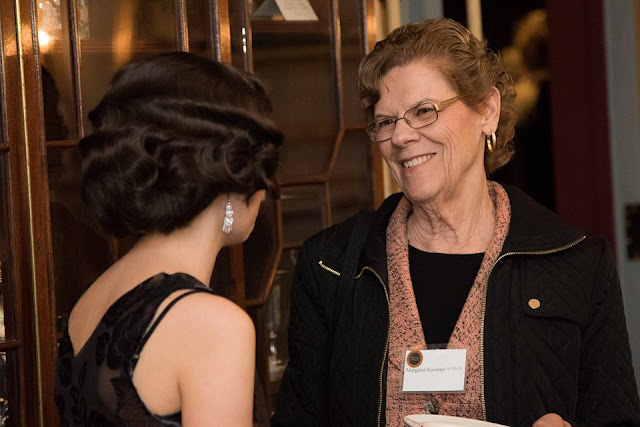 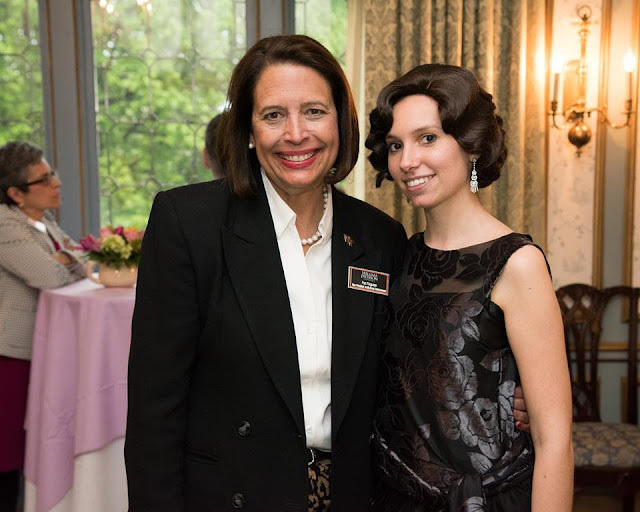 I completed the look with a black satin slip which I'll feature in another post, modern earrings that had a great art deco vibe, and a wig from Wildcat Wigs on eBay. The model is Rose in the color Chestnut, and it only cost about $35. Despite its affordable price, the wig is of very good quality, and is a close approximation to the natural color and sheen of my own hair! I would definitely recommend this wig to people looking for an affordable and attractive 1920s fingerwave style wig.

I'm enrolled in the Humanities track of the Honors College at William Paterson University; the requirements to graduate from this track include writing a thesis paper. I chose to write my thesis on French fashion during the 18th century, and how it changed as a result of political, social, and cultural influences. I'm so proud of myself for writing 70 pages on this subject!

To take my thesis to the next level, I decided to create gowns representing the sartorial periods before and during the French Revolution; I used these gowns during my thesis presentation. For the 1770s look, a full-size gown would have been too expensive and time-consuming to make, and it would be hard to quickly get a model in and out of it. Therefore, I chose to make a poupée de mode to display the 1770s fashions! My research indicated that these dolls were used to disseminate new trends across national and international borders, because the costs of making many full-size examples was very prohibitive.

A robe à la française was constructed as this ensemble would still adequately illustrate the unique excesses of French court fashion. The poupée de mode is dressed in a full ensemble suitable for an average day at court, but too casual for high functions of court. Her outfit, from the inside out, consists of a chemise, fichu, panniers, petticoats, and gown. A vintage porcelain doll was used as the poupée de mode due to her size, hair color and style, and face decoration. A music box is integrated into the doll’s back, which made the use of miniature stays awkward and inefficient; as a result, stays were omitted from the final ensemble.


I found this old doll in my attic; she received quite the makeover with this gown and hairdo (the best I could do with her matted curls)! It's also fun to see how the shape of clothes can change the visual perception of the body; look how much curvier she looks in the 1770s outfit! That shape is purely a visual illusion, as she isn't wearing stays. 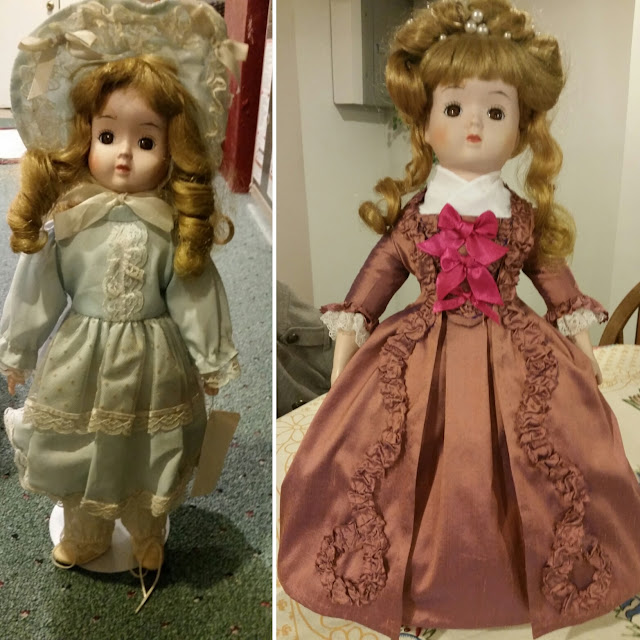 All of the clothes on this doll were sewn by hand. Janet Arnold's Patterns of Fashion 1: Englishwomen's Dresses and Their Construction, 1660-1860 was used as the main guide for draping the robe à la française.

The doll’s chemise is made of fine white cotton voile. Due to the small scale of the garment, the chemise’s gussets are cut in one piece with the main body and sleeves of the chemise. The chemise was sewn entirely by hand—using a combination of back stitches and running stitches—in white cotton thread, though linen thread would have been more historically appropriate. The chemise reaches just past the doll’s knees and the sleeves reach to the elbow. The snug fit of the sleeves places this chemise near extant examples from the 1770’s and 1780’s. The chemise is sewn with a fixed, rounded neckline, which is closely fitted to the doll’s torso with the use of an inverted box pleat at the center front. 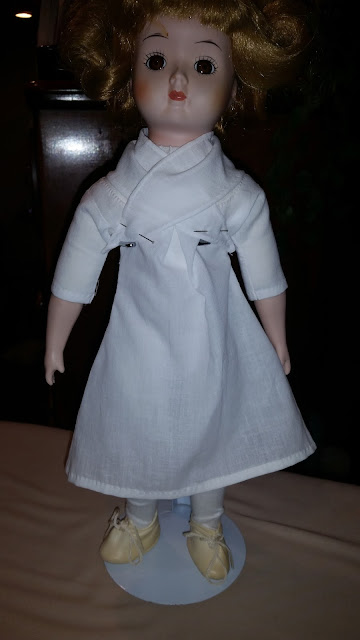 Creating a fichu was an efficient and attractive way to disguise the doll’s dirty cloth body. Fichus appeared very often as accessories in portraiture of the last quarter of the eighteenth century. Shaped like an elongated triangle, they wrapped around the torso and provided modesty and protection to the exposed neck and chest. Like the chemise, the fichu was constructed from cotton voile. It is finished with a hand-sewn rolled hem in white cotton thread.

The panniers were constructed of a tight-weave cotton which was strong enough to support the plastic bones, used to create the characteristically half-moon shape of the panniers. The panniers were stitched by hand using running stitches and backstitches in cotton thread. The waist ties were made of period-correct cotton twill tape. 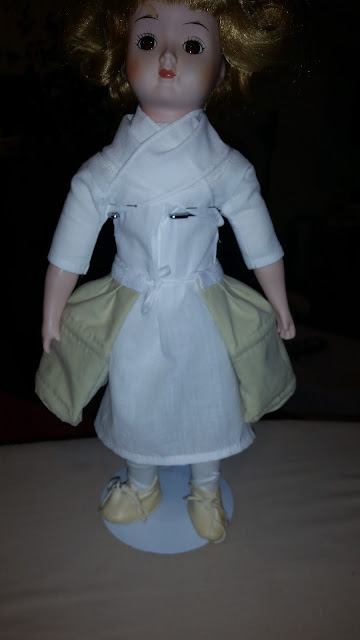 Like the panniers, the under-petticoat was made of a sturdy cotton fabric. Eighteenth century petticoats were simple in construction: they were essentially wide rectangles, sewn together at the sides, with space left often at the side seams so that the wearer could access her pockets or panniers underneath. At the top of the petticoat, a box pleat is made at the center—an inverted box pleat at the back of the petticoat—and knife pleats radiate out towards the side seams. Rather than a continuous waistband, the petticoat is made with both a back and front waistband. In this manner, the wearer first fastens the back waistband around her waist using twill tape ties, and then fastens the front waistband, concealing the ties of the back waistband beneath it. This arrangement allows for the wearer to achieve a snug fit, especially in the case of size fluctuation. 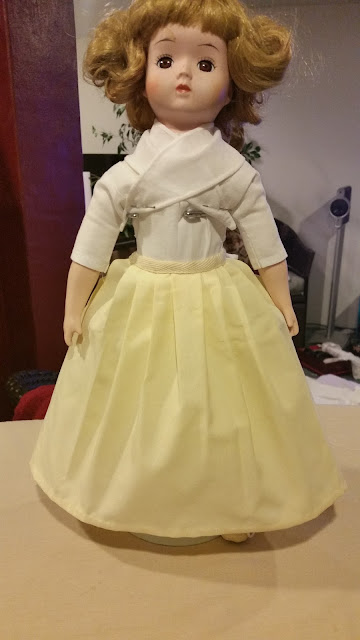 The outer petticoat was made in a silk dupioni with purple threads in the weft and orange threads in the warp, creating an iridescent effect. The waistbands are made of silk, rather than twill tape. 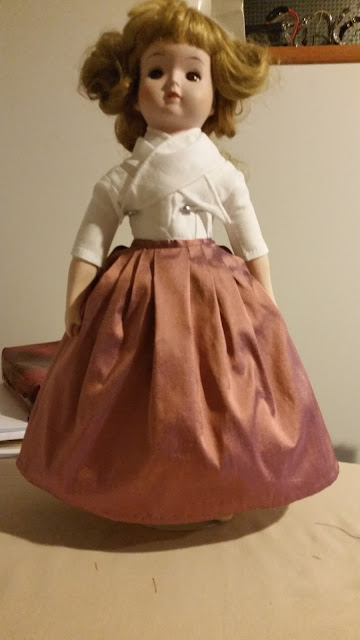 An extravagant robe à la française was selected to be the gown worn by the poupée de mode, for its complex construction and elaborate embellishments presented financial and temporal challenges if made full-size. The robe à la française was made in the same silk dupioni as the outer petticoat. The entire gown is cut in one piece, and shaping is created by the generous use of box and knife pleats. Five knife pleats converge at the side seams, providing ample fabric to spread over the panniers; in accordance with extant examples, the gown was constructed with two box pleats from the front of the gown facing the back, and three from the back facing the front. At the back of the gown, two box pleats are stacked on top of four knife pleats. A trapezoidal piece of fabric bridges the area of the shoulder and encases the top of the sleeve; the only seam of the sleeves faces the back of the gown. 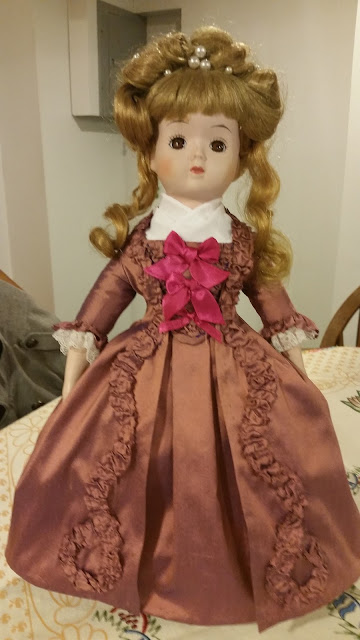 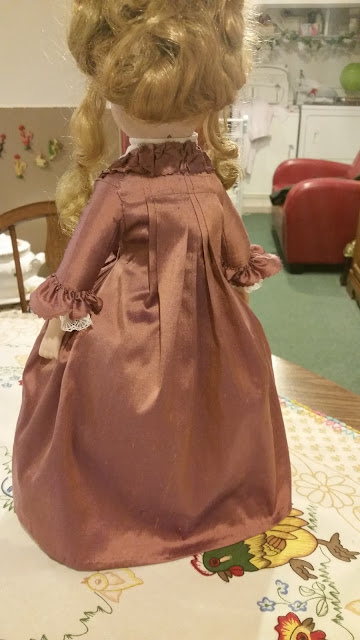 The gown fastens over a triangular stomacher. The stomacher, lined with white cotton, is decorated with rows of graduated pink bows and pinked and ruched trim. Here it is shown with the bows pinned on, ready to be sewn! 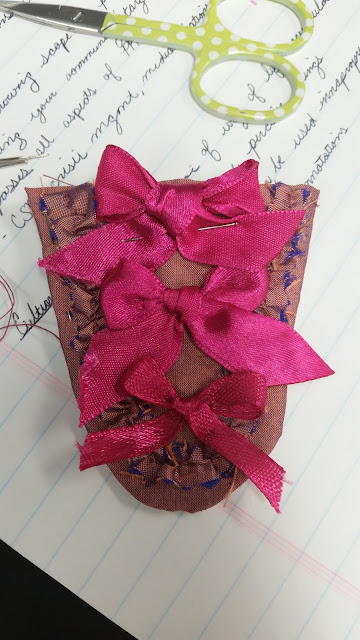 This was a very economic project, as most of the bits and pieces came from my stash. Though the doll wasn't perfect, because of the built-in music box, her look as very suited to the period. This was also a very quick project, and making the entire project took me about a month.
4 comments: