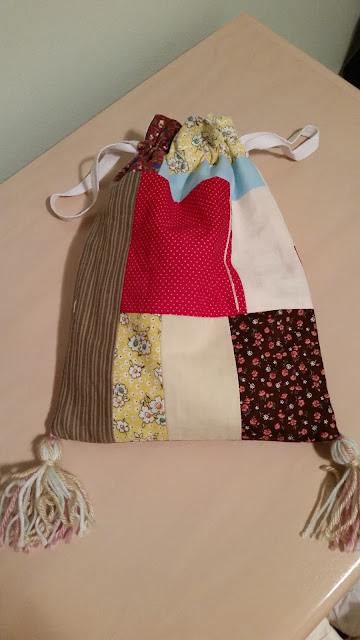 The next element of my Portuguese turn of the century peasant outfit was a drawstring bag made out of scraps of fabric. Traditionally, these bags were used to carry small meals, like sandwiches. My father, who lived in Portugal until his 20's, remembers using a patchwork bag like this! Called a saco de trapos in Portuguese, this project was a nice way to use up scraps and create a useful accessory that could take some wear and tear.

Many Portuguese folkloric and/or ethnographic groups use sacos de trapos as part of their outfits.

I used scraps of cotton or poly cotton fabrics for my bag. I tried to have an equal mix of printed and solid fabrics. The bag is approximately 9 inches wide and 11 inches tall; it's still a bit small, however, and I could have made it larger. It is lined in the same lovely, stiff cotton my petticoat is made from. I even made a pocket inside to keep my cell phone separate from my keys and other things that could scratch it! It is decorated with two tassels made out of pink, green, white, and cream yarn, and fastens with a .5 inch wide twill tape through a drawstring casing. 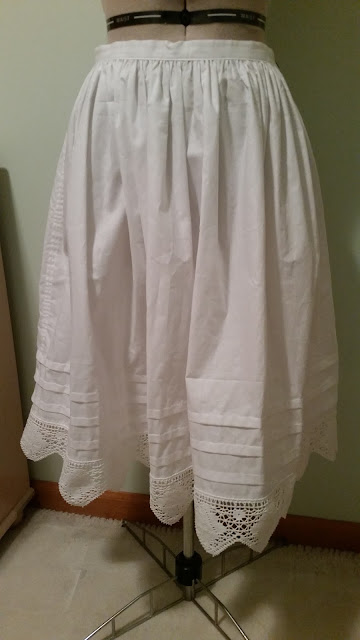 The past month has passed in a flurry of sewing as I've created, from the skin out, an outfit for a Portuguese country woman in the late 19th and early 20th century! You can read more about the petticoats (known as saiotes in Portuguese) used with the Portuguese folkloric costume here.

The first item I made was a white cotton petticoat, trimmed with three .5 inch pintucks and wide white crochet lace. The white cotton fabric and lace were purchased in Portugal and are of exceptional quality. The fabric already was lightly starched, perfect for a nice, full petticoat.

My petticoat only has a 3 yard circumference because I only had 3 yards of lace. I consulted a few websites that sell extant petticoats or reproductions of petticoats for use by folk dancing groups, and this seems to be an average hem circumference. The lace is hand sewn to the hem of the petticoat, and the waistband is also hand sewn.

It is gathered to a 1" wide waistband, which fastens with a tab and bright blue button. This fastening is supported by evidence in petticoats of the period. The waistband rests lower on my hips so as to reduce the pressure of waistbands (from the petticoats, skirt, apron, and pocket) digging into my waist.


This was a fun and quick project! I see where I could improve on the next petticoat, but I still love this one very much. It was just the thing to motivate and prepare me for a long month of furiously sewing the rest of my turn of the century folk outfit. And it's nice to have a little petticoat to dance around in!

What is your favorite seam technique and closure for petticoats? 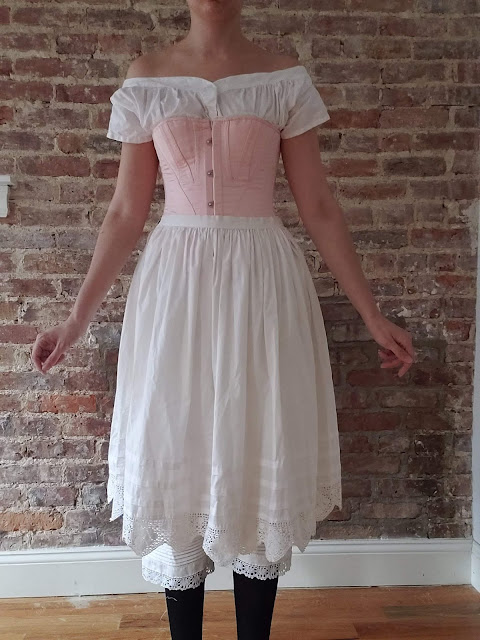