Simplicity 2890 is a staple for the modern mid-nineteenth century sewist. Designed by Kay Gnagey, these patterns for a chemise, drawers, and corset come straight from the designer's own copies of Der Bazaar and La Mode Illustree. I recommend them for their ease of construction and period-correct shapes. However, as is common with commercial patterns, some instructions leave you scratching your head in confusion, so read through the directions thoroughly and feel free to ignore them when they flat out don't make sense 😀 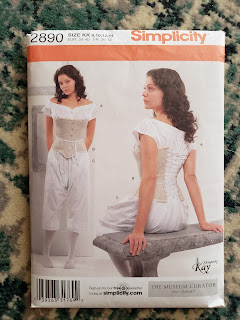 1863 Chemise
This pattern is copied from an original chemise pattern from 1863 from Der Bazaar. It's not as voluminous as other chemise patterns from the Big 4 pattern companies, and doesn't require any gores. However, it's still quite roomy - I recommend cutting out the smallest yoke pieces in your size group in order to keep the chemise from slipping down your body. Note that with a corset on, the chemise stays in place. I also placed the button and buttonhole 1/5" higher than the pattern suggested in order to better keep the chemise on my shoulders. The underarm facing is easy to install, and notches and markings match up well.
Some issues:
If you're interested in a detailed step-by-step guide through the making of this chemise, please watch my video below! 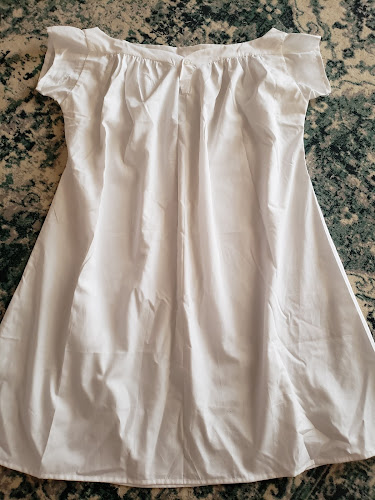 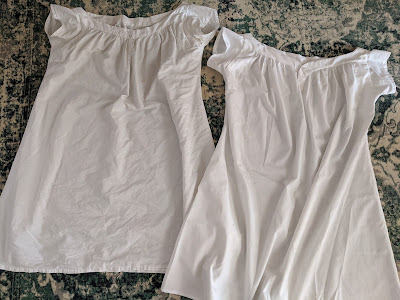 For my first iteration of this chemise, on the left, I modified the front yoke to be straight across rather than curved. It was easier to apply and more 1840s-1850s in style. I wore the chemise on the left almost every day as loungewear/pajamas for 3 years!
1860s Corset
This was the first corset I ever made, and my inexperience complicated what was otherwise a good pattern. I cut the smallest size, 8, without doing a mockup - but the corset is really too small for me (with a 4 inch gap in the lacing), especially in the hips, so I should've widened the hip gore as well as cut a larger size.
I overcomplicated the gusset insertion by using 3 layers of fabrics (cotton satteen, cotton muslin, and cotton canvas) - this is a one-layer corset that works best when constructed with a stronger canvas or coutil. I ended up using an 11" busk instead of the 12" busk recommended by the pattern. I used plastic zip ties for the boning and size 00 grommets and washers. 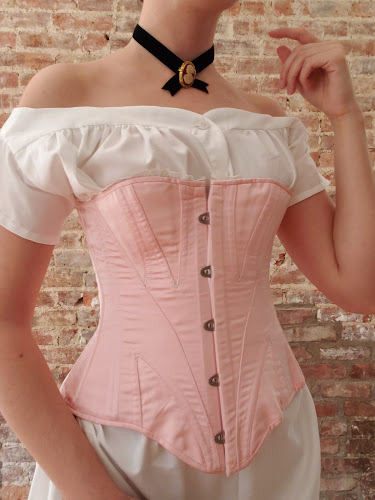 1862 Drawers
The drawers are taken from an original pattern from 1862 in Der Bazaar. They are easy to construct and have a period appropriate shape. I whip stitched the waistband facing in addition to topstitching the waistband (the pattern only instructs you to topstitch it).
One change I made was to have 8 1/8" tucks rather than 4 1/2" tucks, based on these extant drawers from the Metropolitan Museum of Art. Based on that extant example, I also modified how I applied the lace trim (and frankly, I didn't understand the pattern's instructions for applying the lace trim). I had exactly enough of this cotton (crochet? knit?) lace to go around the legs of the drawers. I cut my length of lace trim in half, sewed each half into a tube, and whip-stitched the lace tubes onto the hem edge of my drawers. I also decorated my drawers with featherstitch embroidery, as my inspiration drawers from the Met were.
If you're interested in a detailed step-by-step guide through the making of the drawers, please watch my video below! 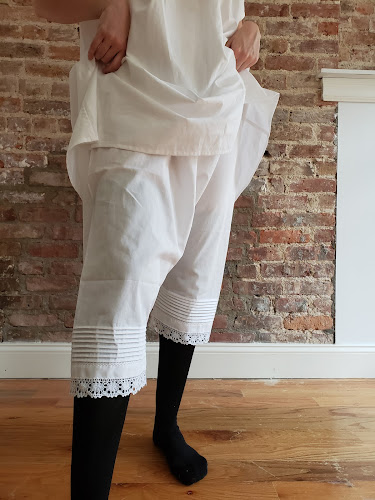 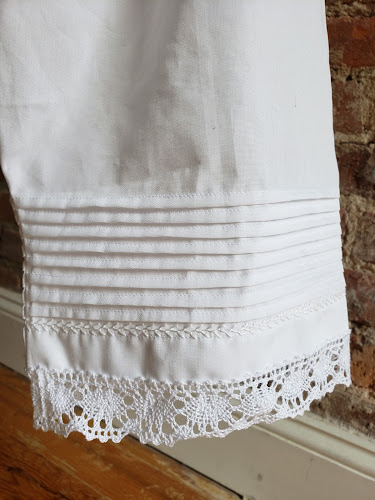 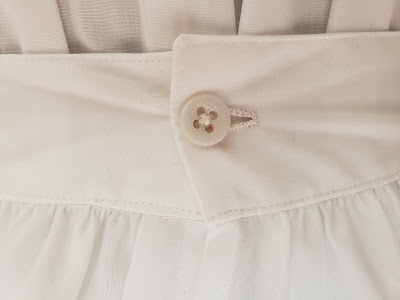 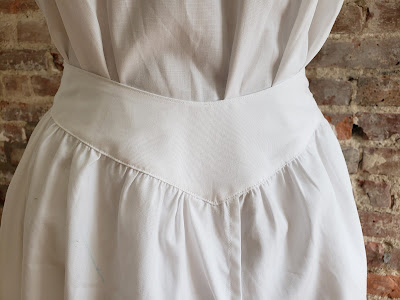 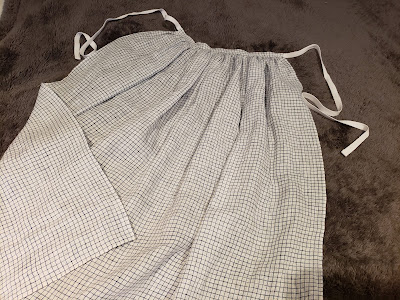 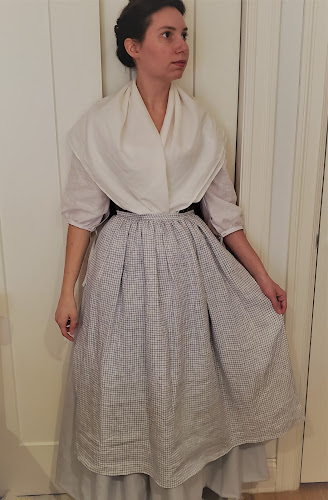 A combination of factors led me down an intense weekend rabbit hole of checked linen aprons: Burnley & Trowbridge's video tutorial series on 18th century aprons, a desire for a quick side project, and a need for more aprons as my interest in historic cooking increased.
I found 2 yards of blue checked linen from Burnley & Trowbridge in my stash and set to work. I already had a brown checked linen apron, but blue is my favorite color (if you couldn't tell from the majority of blue items I made last year 😉), and what else was I going to use all that checked linen for?
Imagine my surprise when, as I was searching through the 1840 edition of The Workwoman's Guide, I found a reference to blue checked linen aprons!
Never one to turn down a small hand sewing project, I tuned in to the 1995 Pride & Prejudice and set to work. The whole process took about five hours and was an enjoyable way to practice my hand sewing skills. It's very satisfying to have a hard-wearing, washable apron that is just as appropriate for 1740 as it is for 1840!
Examples of checked linen aprons in the 18th century:
http://www.larsdatter.com/18c/checked-aprons.html 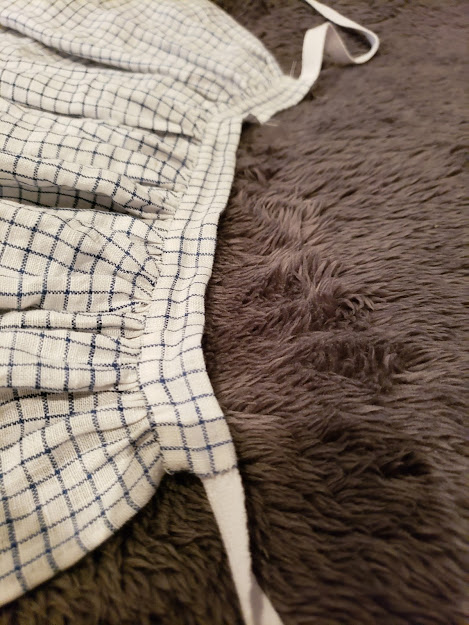 I've been having a lot of fun experimenting with the recipes in my 1912 edition of Fannie Farmer's New Book of Cookery! 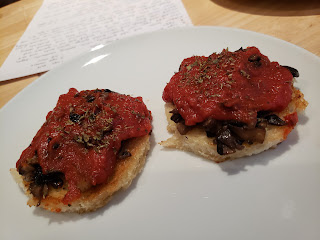 Notes on the recipe: I halved the recipe, which yielded 3 mushroom toasts rather than 6. Your yield will vary depending on the size of your bread and cutters. To make this recipe faster and easier, omit shaping the bread with a cutter and add the ingredients from step 3 into the pan before the mushrooms finish cooking.