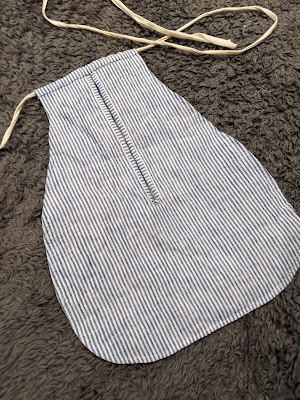 Folks interested in historical clothing and historybounding have no doubt come across the charming practically of the tie-on pockets that were very popular in the 18th century (among other time periods). Most surviving examples of 18th century pockets are made of pear-shaped pieces of fabric sewn together, with the outer edges bound in tape or a fabric strip.

However, in my search to identify extant 18th century pockets made of striped linen (I wanted justification to use up some blue striped linen scraps I had*), I discovered an interesting outlier: the (apparently) French-seamed (I doubt the 18th century peeps called it that) pocket!

*Note: striped linen pockets are well documented too! Larsdatter has a great survey of extant pockets.

For example, take a close look at this striped linen pocket (dated 1789) from the Metropolitan Museum of Art. Instead of binding around the outside edge, the fabric pieces are sewn right sides together and flipped right sides out...encasing the raw edges with the pocket! Further inspection reveals a line of stitching about 1/4 of an inch around the edge of the pocket, which I suspect is to hide the raw edges on the inside of the pocket and strengthen that seam. This appears to be what we'd call "French Seams" today! 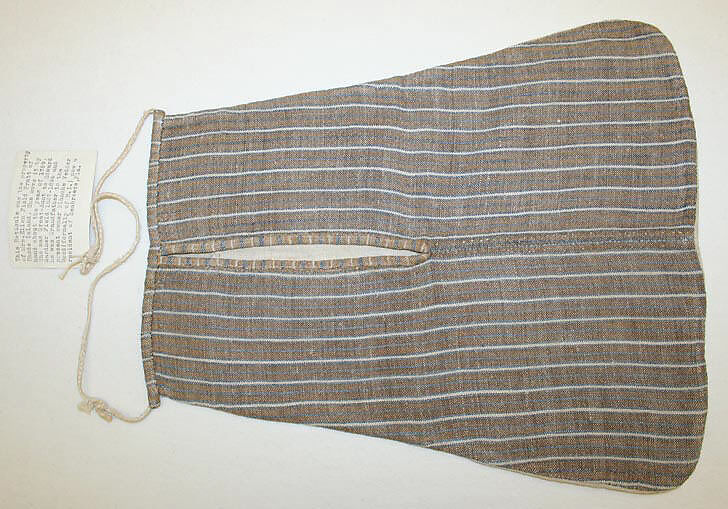 Here's a similar pocket, also made of striped linen fabric, from the Smithsonian, dated from 1770-1830: 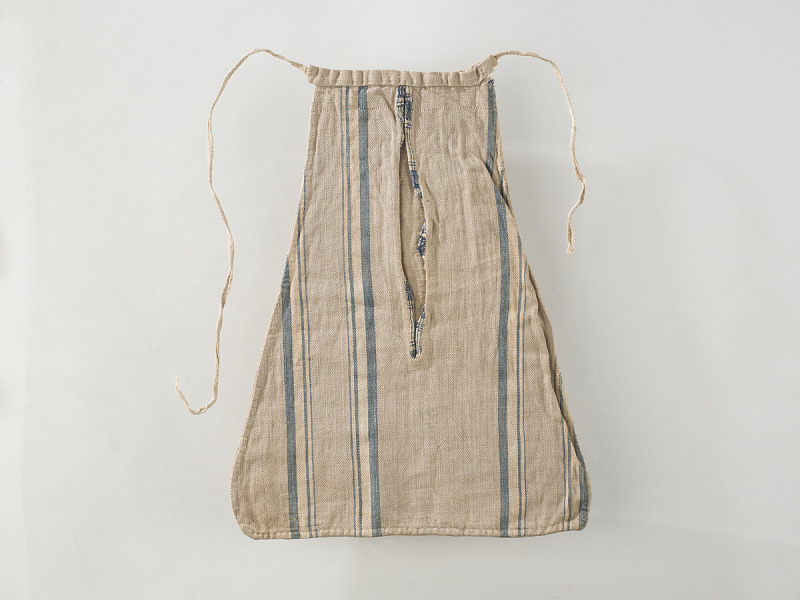 And here's another example - also in striped linen, am I sensing a trend? - dated from 1775-1825. Zoom in on the picture to see the stitching along the edge of the pockets. 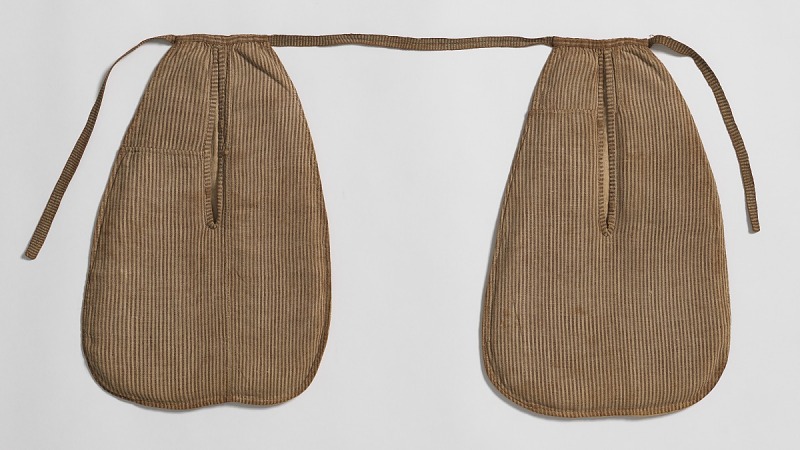 The Ladies' Work-table Book from 1850 offers clear instructions on making such a pocket*: 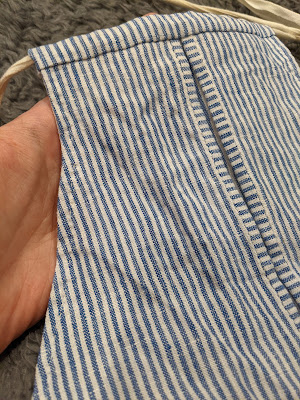 "You take a piece double, and cut it to the shape required. Stitch the two pieces neatly round a little distance from the edge. Then turn it, and let the seam be well flattened, and back stitch with white silk a quarter of an inch from the egde; cut a slit down about four nails, which is to be either hemmed, or have a tape laid round it on the inside. Set on the strings, and the pocket is complete."

*This book also includes instructions on adding pockets to petticoat/skirt seams. It's interesting that instructions for separate pockets are still circulating in the 1850s!
I sewed my version of the Met Museum's pocket from scraps of blue striped linen from William Booth Draper. The pattern was a simple pear-shape that I made big enough to fit my smartphone.

I sewed the entire pocket by hand and it was finished after a few hours. I highly recommend trying to make this style of pocket!

I sewed the pocket front and back pieces together with a scant 1/8" seam allowance. I then turned the pocket right side out and finger pressed the seam, and stitched an additional 1/8"-ish away from the seam.

Next, I cut the slit on the pocket (although this step can be done before assembling the pocket as well). I bound the slit in a narrow strip of the linen fabric. The top of the pocket was finished off with a wider strip of linen fabric through which I'll pass some twill tape for a drawstring. 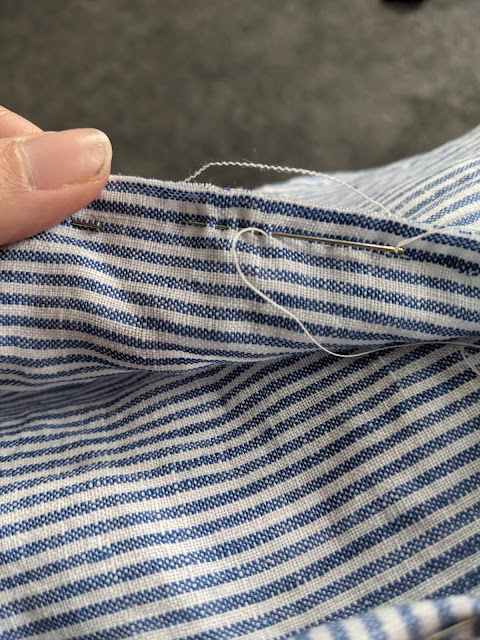 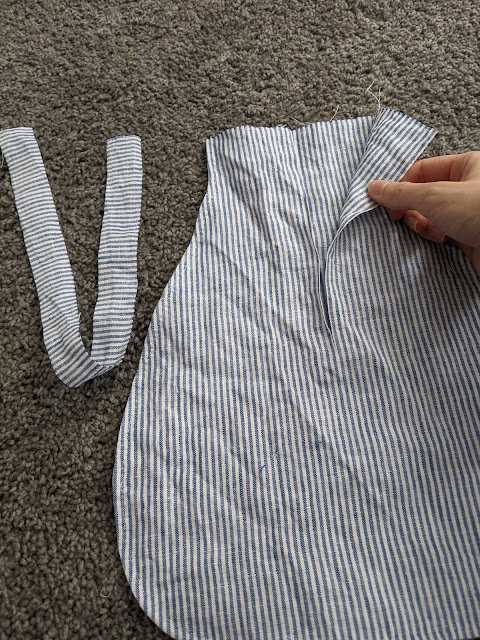 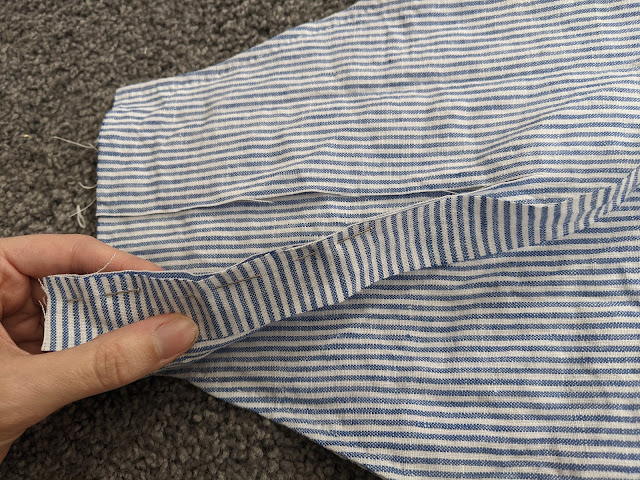 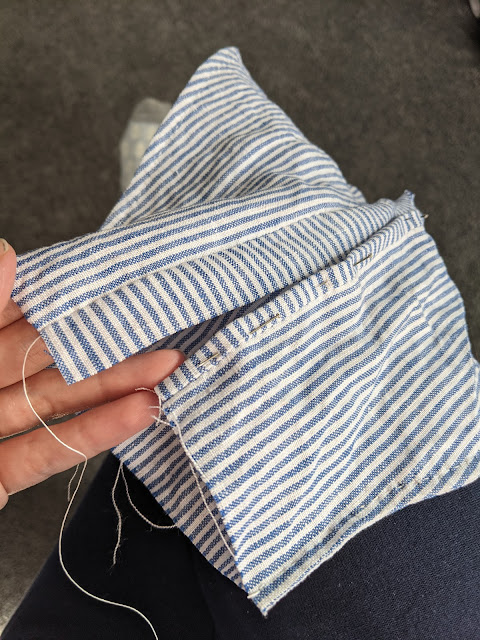 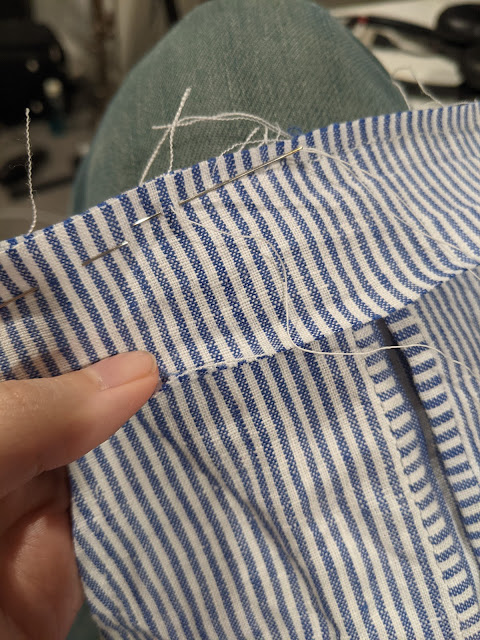 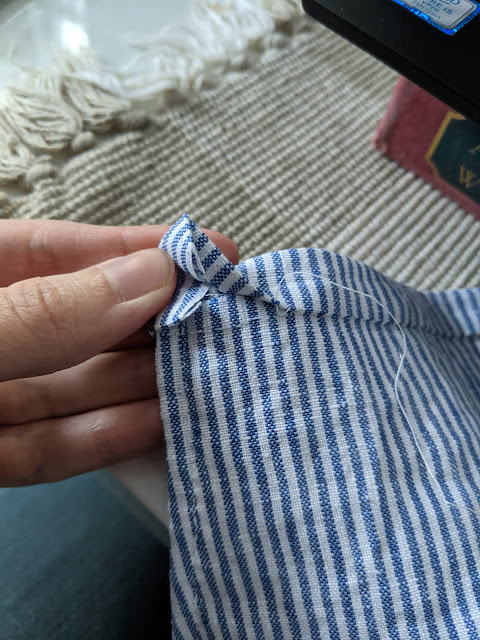 Here's a comparison of my first 18th century pocket (one of my first sewing projects ever!), with half-finished embroidery and poly-cotton binding, and my new linen pocket. These pockets are a perennially fun and easy project!
Dear readers, have you ever seen non-bound pockets like this? What's your favorite style of 18th century pocket? 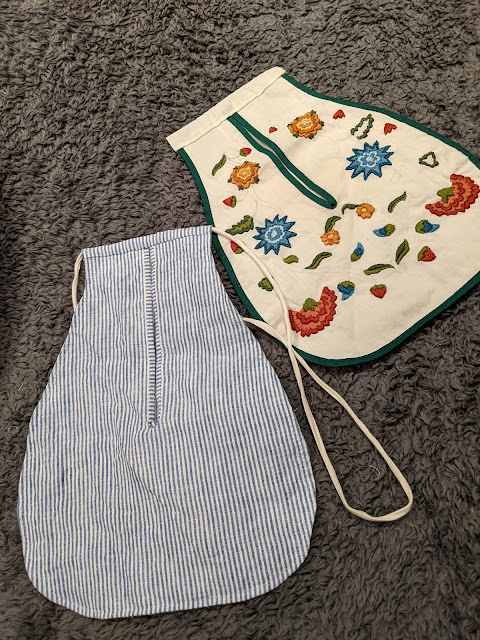