The piece I felt the most urgent need to tackle was this 1920's beaded "Flapper" dress. It was displayed on one of the newer mannequins, which unfortunately had a bust far too big (almost a C cup!!) for the dress, causing a lot of stress damage and tears to the front of the dress. Also, because of the weight of the beads on the thin tissue-silk, the shoulder straps were riddled with tears and almost completely worn away, and the T-back strap had long since torn. Someone from the museum had used several large black ostrich plumes tucked into the front of the dress to conceal all of the shattering--sadly, this caused even more damage.

My plan for this dress is to display it laying horizontally in a display case, with some relevant accessories tossed in there for context. Luckily, the director of the library, Mr. Josh Humphrey, had a nice wood case lying around, with an emerald felt lining. I thought it was the perfect canvas for this rather pale dress to "pop" (considering it doesn't really stand out on its mannequin...I guess you have to have a certain complexion to pull off this pale shade of beige!).

It was quite a task taking this dress of the mannequin. I knew it would be heavy, but I didn't anticipate it being as heavy as it was...it's a wonder the whole thing is (mostly) still intact, what with those pounds of beaded fringe dangling off the bottom. I barely breathed the whole time I was moving the dress, as it was so fragile.  I laid the dress onto two sheets of archival tissue paper. This will prevent the dress from absorbing any dirt or dyes from the green felt lining of the case. It also facilitates me moving around the dress to get it perfectly centered in the case.

After I got the dress all straightened out on its tissue paper bed, I took 4 more slices of tissue paper and, with great maneuvering, slid them inside the dress through the bottom opening (which has suffered less structural damage than the top of the dress). With all this, the beaded fringe at the bottom of the dress had become terribly tangled, so I whipped out more tissue paper and began carefully separating each bejeweled strand.  After I had all the strands of fringe neatly lined up, I slid out the tissue paper and the fringe remained (relatively) neat and tidy. 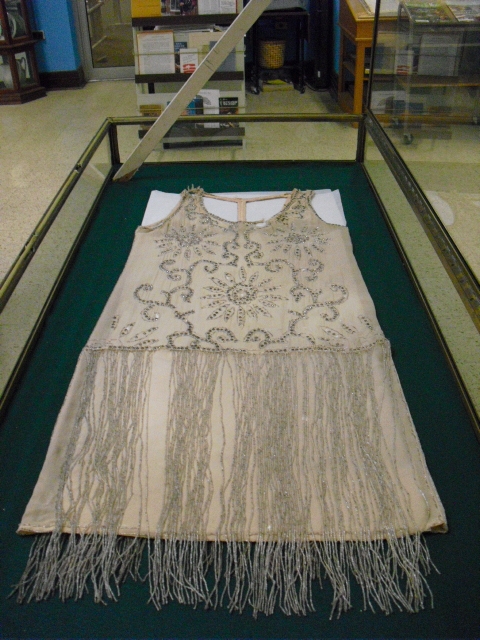 To neaten up all that tissue paper still visible around the armscythes and neckline, I carefully snipped slits in the tissue paper, which helped me fold it under the neckline and armscythes. The final effect is really clean and sharp.

Into the case, I added the feather-and-jewel headband and long pearl necklace that were displayed on the mannequin with the dress. I also popped in a pair of white, elbow-length beaded gloves (which were previously displayed on the floor of the dais), and later, a blue (I believe celluloid) haircomb with paste jewels (not visible in the following pictures). I also added a paste-jewel brooch that was previously pinned onto the collar of an extremely faded c. 1905 wool bodice. The case still looked kind of empty, so I added in one non-historical piece: a stretchy beaded bracelet that was on the arm of a mannequin wearing a sequined 1950's dress. Regardless of non-historical accuracy, the bracelet helps visually fill out the space, and its colors coordinate with the rest of the display.