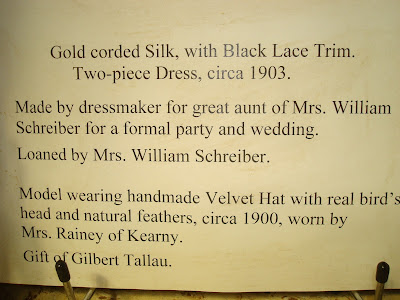 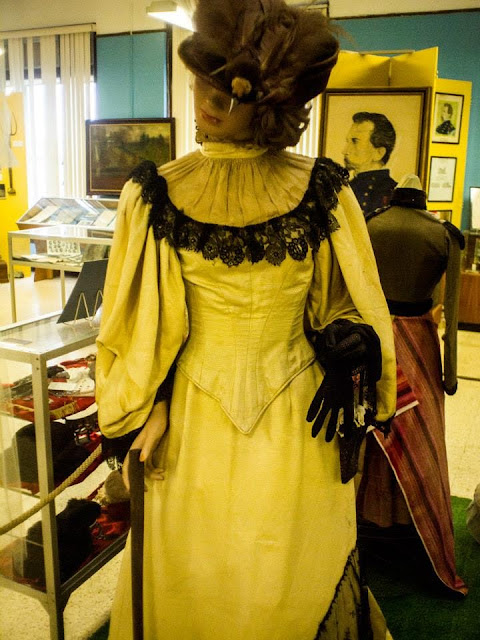 This gold corded silk gown  is very interesting in terms of dating and construction. The seamlines on the bodice indicate that it is clearly from the 1890s (1894-7 is a more specific estimate), but the display card and the neckline decoration are plausibly from 1903. It is likely that this gown was refashioned to fit in with changing styles; this was a popular practice for hundreds of years, as clothes that grew out of fashion were either refashioned to the new style or the material was scrapped and used for something else. Waste not, want not! Centuries of women were recycling their mother's and grandmother's clothes before it became the fashion norm (I'm talking to you, Etsy!).

I asked around the fashion history blogosphere for some insight on this dress, and surprisingly, almost everyone agreed that the bodice was on backwards! I never would have guessed until it was pointed out to me, but now that I've noticed it, I realized that the sleeves in this position show the center seam and there is too much fullness at the front of the sleeve--the old museum crew really did put this bodice on backwards!

The gown has large, full cape-like sleeves, trimmed in a matching black lace. 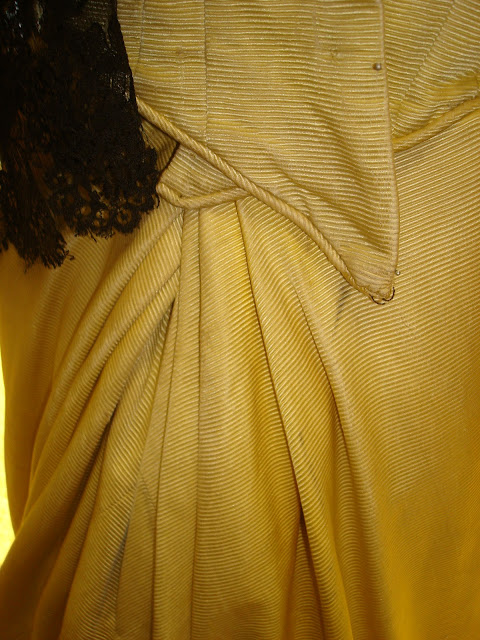 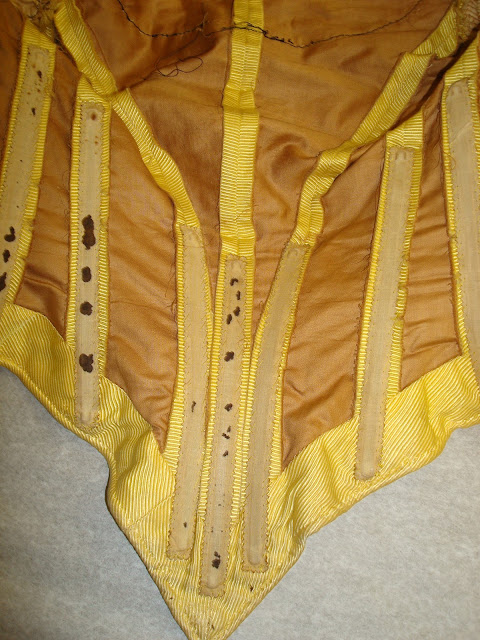 The skirt is pleated in the back to a cotton waistband. There is a large triangular godet in the back of the skirt that gives the skirt fullness and dramatic sweep. The waistband doesn't appear to have a closure; there are no buttonholes or stitching, no evidence of hooks and eyes. The waistband is held shut with a huge safety pin, which was tugging and tearing the fabric (the skirt is very heavy). After removing the bodice, the original color of the skirt is visible. Although it hasn't suffered too much from the sun, the gold silk has lost its original luster. The skirt is lined in yellow cotton. It is trimmed with a wide swath of black lace that also might've been a later addition, since the lace stops at the left thigh and the raw edge was neither cut neatly or turned under.

The mannequin's posture is very strange; her hips lean forward and she doesn't have much of a derriere, so the weight of the skirt pulls up the hem in front. Whoever displayed this dressed devised an interesting (read: ineffective and weird) support system: a dirty blue polyester shirtdress folded up and attached to a rope cord that looped around the mannequin's waist. This was covered with a large piece of packing paper stapled to wide grosgrain ribbon, also tied around the waist. As you can see from the photos, this technique did nothing to imitate the posture and body shape of an 1890's woman and the skirt was woefully unsupported. 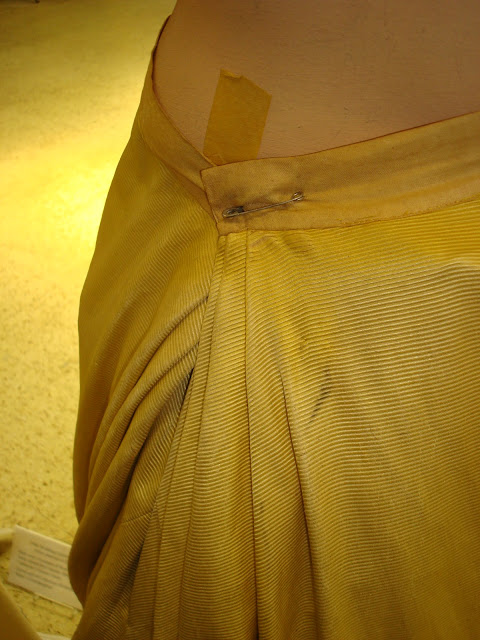 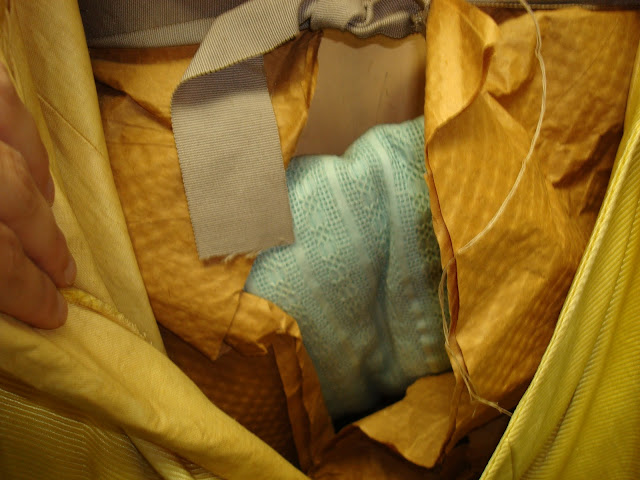 I sewed the waistband closed, to avoid further damage and pulling on the waistband fibers from that huge safety pin. I used rolled up wads of acid-free tissue paper to fluff up the mannequin's behind but to no avail--her posture is so bad that the skirt has no choice but to lift up in front. The worst part was that this showed the mannequin's rusting pink-brown stand and feet. I tried my best to clean the crud off of the stand, but that only chipped off more paint, revealing an even worse color underneath. To solve this, I took a length of black felt (which I found lurking in the back room) and arranged it under the skirt to 1. simulate the appearance of a petticoat/ underskirt 2. not be as horribly distracting to the overall look of the dress. I also used wads of acid-free tissue paper to simulate the support of petticoats and fluff out the skirt around the legs. I cleaned up the whole mannequin, vacuumed the wig, put the bodice on the right way, and the look of the display was already improved. 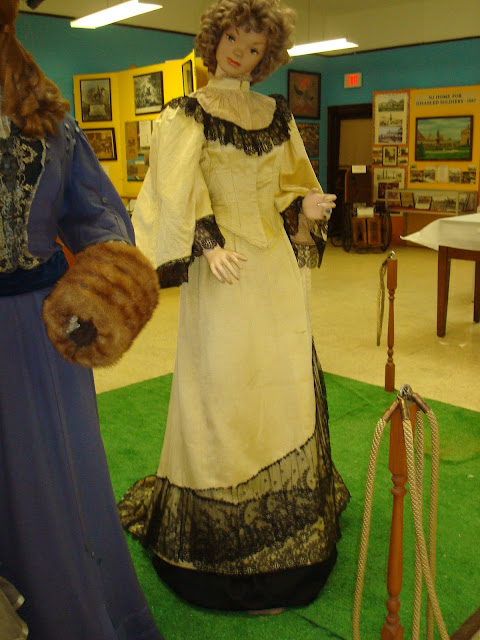 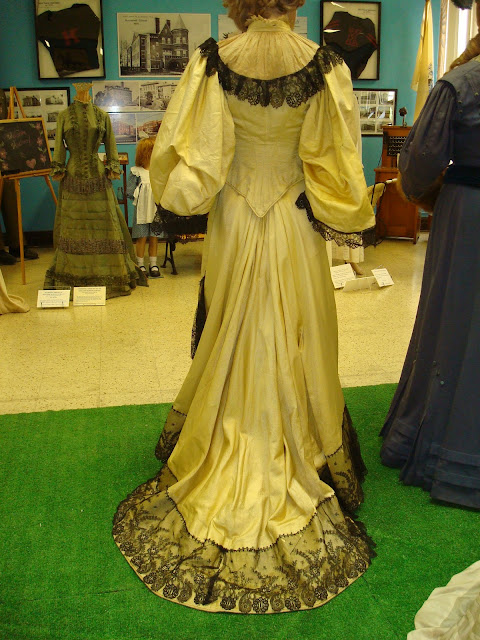 The dress was accessorized with a brown velvet hat topped with a bird's head, black knit gloves and a black beaded handbag. The black gloves were streaked with dust (or possibly fading). I soaked them gently in water, and each soak turned the water murky brown. I wasn't able to totally clean the gloves, but at least this is an improvement.